Yvonne A. Johnson Honored for Excellence in Science Education

Backed by more than five decades of professional expertise, Ms. Johnson commenced her retirement in 2011

SYCAMORE, IL, May 18, 2021 /24-7PressRelease/ -- Yvonne A. Johnson has been included in Marquis Who's Who. As in all Marquis Who's Who biographical volumes, individuals profiled are selected on the basis of current reference value. Factors such as position, noteworthy accomplishments, visibility, and prominence in a field are all taken into account during the selection process.

With 60 years of experience to her credit, Yvonne A. Johnson is currently retired, having excelled as a coordinator for the Media and Learning Center at West Elementary School in Sycamore, Illinois, from 2002 to 2011. Prior to this role, she served West Elementary School for nearly five decades as a teacher from 1953 to 2002. Previously, Dr. Johnson began her career as a teacher at the Love School in DeKalb County, Illinois, from 1951 to 1953.

Before embarking on her professional path, Ms. Johnson pursued an education at Northern Illinois University, formerly known as Northern Illinois State Teachers College, earning a Bachelor of Science in education in 1951. She continued her studies at the aforementioned university in 1960, graduating with a Master of Science in education. Obtaining a certification as a master elementary science teacher from the National Science Teaching Association, she additionally completed coursework at Rockford University, Aurora University, Oklahoma State University, Lewis University and the National College of Education at National Louis University. Following these accomplishments, Ms. Johnson accepted an honorary Doctor of Philosophy from the Sycamore Community Unit School District in 2008.

Ms. Johnson has participated in numerous endeavors that highlight her wealth of knowledge in the field. Conducting more than 250 elementary teacher science workshops, including "How to teach Science to Elementary Students," between 1995 to 1998, she has contributed to the Sycamore Public Library as a member of the board of directors from 1974 to 1998, the president of the board of directors from 1984 to 1998 and the chairman of the major fund drive for additions to the library from 1994 to 1998. Serving on the board of directors for the Family Service Agency of DeKalb County from 2010 to 2017, she has held a number of positions with the Midwest Museum of Natural History, including as a trustee since 2001 and the president from 2006 to 2009. A volunteer for the KishHealth System's Northwest Medicine Kishwaukee Hospital since 2011, Ms. Johnson has found success with her written works as well, having penned articles for publications in her industry.

In light of her exceptional undertakings, Ms. Johnson has accrued several accolades throughout her impressive career. Eponymously honored with the Yvonne A. Johnson Science Wing by Kishwaukee College in 2015 and an Australian area with Brookfield Zoo Encounters named after her in 2015, she has been celebrated with the Clifford Danielson Outstanding Citizen Award from the Sycamore Chamber of Commerce, a Certificate of Honor and the Presidential Award for Excellence in Science and Math Teaching, and a Tribute to Heroes Award from the Boy Scouts of America. Furthermore, Ms. Johnson was presented with National Science Foundation grants from the Pennsylvania State University, Illinois State University and Rutgers, The State University of New Jersey, as well as a grant from the state of Illinois, and she attended educational workshops through NASA.

Additionally, Ms. Johnson has been recognized as the Outstanding Science Teacher in Illinois by the National Science Foundation and the Illinois Science Teachers Association, the DeKalb County Conservation Teacher of the Year, a Master Teacher by the governor of Illinois, an Outstanding Agricultural Teacher in the Classroom by the DeKalb County Farm Bureau and a Distinguished Alumni by Northern Illinois University. The founder of the DeKalb County Excellence in Education Award in 1999, she was also notably inducted into the Distinguished Alumni Hall of Fame by Sycamore High School in 2013. Likewise, Ms. Johnson was selected for inclusion in the 25th edition of Who's Who in the Midwest and multiple volumes of Who's Who in America, Who's Who in American Education and Who's Who of American Women.

Inspired by her mother and father, Ms. Johnson is exceptionally proud of her efforts with the Sycamore Public Library, during which time she helped raise $3 million for building an addition for the organization. Attributing her success to her sense of humor and her ability to stand firm, she has defined her personal and professional life by her longevity as well as having helped each and every person to do their best. Further motivated by her love for her students and the subjects that she taught, she was additionally mentored by several superintendents and principals, including Burdette Peterson, Mary Currie, Don Rich and Dr. Robert Hammon. Looking toward the future, Ms. Johnson hopes to advocate for future educators to treat others as they would want to be treated while cementing her legacy among her peers and students. 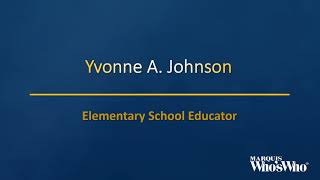