Natalia Khvost-Vostrikova Recognized for Her Talent as an Artist

Ms. Khvost-Vostrikova's artwork has notably been showcased in exhibitions around the world

LANTANA, FL, May 18, 2021 /24-7PressRelease/ -- Natalia Khvost-Vostrikova has been included in Marquis Who's Who. As in all Marquis Who's Who biographical volumes, individuals profiled are selected on the basis of current reference value. Factors such as position, noteworthy accomplishments, visibility, and prominence in a field are all taken into account during the selection process.

For Russian-born Natalia Khvost-Vostrikova, an impactful career in the arts was almost inevitable as her passions for design, culture, and creativity defined her early years and upbringing.

Upon graduating from high school, she prepared for her professional path by attending the Moscow Technological Institute, where she obtained a Bachelor of Divinity in Arts in 1981 and subsequently became certified in fashion design from the Russian Ministry of Fashion Industry. In addition, she became an appointed member of the Accademia Internazionale "Greci-Marino," Accademia Del Verbano di Lettere, Arti, Scienze. Her love for art, and expertise in the field, has brought her to new cities, provided opportunities to showcase her expansive work across several galleries and venues, and served as a foundation for her success as an educator, lecturer, and performer.

Ms. Khvost-Vostrikova's paintings have been described by Karen Lappon of the International Confederation of Art Critics as a mix between cubism and abstract art that deals with "distorted female forms in an almost transgender approach to her subjects" and "vibrant symphonies of color," whose "Emotions ooze from the canvas and into our psyche." Lappon went on to say that her "brush dances over the canvas in a sensual, instinctive choreography—she has truly captured the natural order of things." Such work of hers has been exhibited in the Florence Biennale in Italy, which she considers the highlight of her career, as well as the 2017 London Art Biennale, where she displayed her oil-on-canvas piece, "Out of Blindness." She also has collections showcased at the State Tretyakov Gallery in Moscow, among several other venues. She and her arresting art were also mentioned in A. Rosenfeld's book, "Forbidden Art: The Postwar Russian Avant-Garde," in which the author writes that her work "glorifies the harmonious coexistence of man and the natural world." In addition to canvas, Ms. Khvost-Vostrikova has also created using ink, photography, and colored pencils.

Some of Ms. Khvost-Vostrikova's work has been shown in the Manege Art Gallery in 2000, and she was also featured in the Moscow Krimskyi in February of 2005, in an exhibition titled "SelfBurning Prediction." Her work has also been displayed in Rome in 2006, and in New York City in 2008 in a SINTEZ reunion located under the historic Brooklyn Bridge. According to V. Pasukov, Ms. Kvost-Vostrikova's work constantly generates stable themes and archetypes which restore images of the "persecuted prophets," "eternal lovers" and "wanderers" seeking their "philosophers stone."

As a testament to her achievements over the course of several decades, Ms. Khvost-Vostrikova has been honored with several Who's Who recognitions, including seven editions of Who's Who in America, five of Who's Who in the World, and four of Who's Who of American Women—as well as an Albert Nelson Marquis Lifetime Achievement Award. Looking toward the future, she shows no signs of stopping, with an aspiration to continue creating art and lending her expertise as a consultant and an educator. In her spare time, she enjoys spending time with her children, Kuzma Nick Vostrikov and Gavrela Nick Vostrikov. 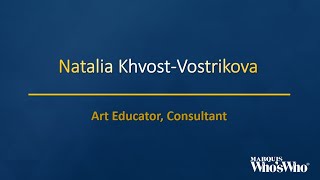