Throughout his young career, Mr. Oakey mission has been to fight "for the people who can't fight for themselves"

ALBUQUERQUE, NM, May 18, 2021 /24-7PressRelease/ -- Adam D. Oakey, Esq. has been included in Marquis Who's Who. As in all Marquis Who's Who biographical volumes, individuals profiled are selected on the basis of current reference value. Factors such as position, noteworthy accomplishments, visibility, and prominence in a field are all taken into account during the selection process.

For Adam D. Oakey, Esq., whose developing career as a lawyer becomes more accomplished with every new day, the path toward the legal profession was paved with adversity, hard work, and personal redemption.

Throughout his youth and into adulthood, Mr. Oakey, a New Mexico native, found himself in trouble with the law often, in and out of jail between the ages of 12 and 26. When he finally matured out of that period of his life, and started a family, he decided he wanted to build a career as a defense attorney in order to help people who were in similar situations that he was, and ultimately change their lives for the better. Having spent seven years as a black belt instructor at Gracie Barra Albuquerque, between 2005 and 2012, and graduating from Anderson School of Management at the University of New Mexico, with honors, in 2012, he enrolled at the University of New Mexico School of Law—where he would earn a Doctor of Jurisprudence in 2017.

In the midst of obtaining his law degree, Mr. Oakey prepared for his career in the role of a judicial law clerk for the First Judicial District Court in 2015 and the Children's Division of the Second Judicial District Court in 2016. Motivated by such mentors as Judge William Riordon, he found success at an attorney-at-law at Bowles Law Firm from 2016 to 2018, and has served as a lawyer at his own practice, the Law Office of Adam Oakey, LLC, since 2018. Throughout his young career, he has accumulated up to 200 clients, for whom he has focused his energy on criminal law, family law, personal injury law, and pardons and expungement, with an overall mission for fight "for the people who can't fight for themselves."

As a testament to his achievements as both a student and practitioner of the law, Mr. Oakey has been recognized with a Seth D. Montgomery Fellowship Award from the New Mexico Center on Law and Poverty in 2015 and was listed among the Top 100 Litigators in 2020. He has stayed abreast of the frequent developments in his field as a dedicated member of the National Trial Lawyers Association and the New Mexico Criminal Defense Association.

Looking toward the future, Mr. Oakey wants to further serve the people of New Mexico through his passion-driven legal services; in addition, he hopes to establish a nonprofit in his community wherein he provides additional educational services to children falling behind in school. Equipped with previous expertise in martial arts training, he also wants to offer such courses to those in the community, especially abused women. One day, Mr. Oakey, a family man with four children, aspires to run for political office and serve as the voice for those who do not have one. 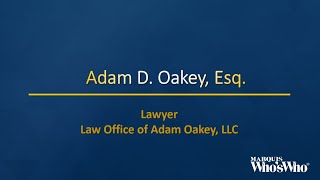