Mr. Garcia's establishment was named to the "Best 50 Restaurants in the Valley" by ABC News

EL MIRAGE, AZ, May 28, 2021 /24-7PressRelease/ -- Edson Garcia has been included in Marquis Who's Who. As in all Marquis Who's Who biographical volumes, individuals profiled are selected on the basis of current reference value. Factors such as position, noteworthy accomplishments, visibility, and prominence in a field are all taken into account during the selection process.

Through faith, a love for helping others, and a passion for cooking and food that began in his youth, Edson Garcia has carved out an accomplished career in the culinary world as the owner and chef at La Bamba Mexican Grill Restaurant.

Born and raised in a poor family in Veracruz, Mexico, Mr. Garcia gravitated toward his profession gradually over the course of his formative years. He was always with his grandmother, Fedencia, while she cooked and, alongside her, he often sold her candies, tortillas, and tamales in the street for extra money. His mother, Mercedes, was also a gifted cook and guided him in the kitchen whenever she prepared meals. From an early age, he knew he wanted to pursue a career as a cook and began climbing the ladder toward his goal as a dishwasher at a hospital, where he saw the chef whipping up food in his official uniform—which further inspired the young Mr. Garcia.

While the road to his dream job wasn't straight and smooth, the skills and experiences that Mr. Garcia accumulated along the way proved to be extremely valuable. Upon completing coursework in engineering at Universidad Veracruzana in 2002, he immigrated to the United States two years later and worked several jobs, including as a drive-thru server at Jack in the Box and a construction worker. He struggled with English and fell into hard times financially, which led to homelessness and addicted to substances. However, despite it all, he persevered and came out of it the other side—a transition that he considers the highlight of his career; he became active as a bartender, line cook, and ultimately assistant manager at a local restaurant, and then ran a food truck between 2016 and 2018.

Since 2018, Mr. Garcia has been the owner and chef at the wildly popular La Bamba Mexican Grill Restaurant in El Mirage, Arizona, where he puts smiles on customer's faces with his food and hospitality. Additionally, he attributes his success there to avoiding mistakes that he has observed other owners, managers, and cooks do in their restaurants—he believes in the details when it comes to the kitchen and front area. Mr. Garcia prides himself in spicing up his dishes with originality and lots of love.

Having experienced his own dark times, Mr. Garcia has been extremely passionate about the struggles of impoverished people, knowing how it feels to have nothing and no friends to rely on. As a result, he has been a frequent donator to numerous charities for the homeless and work in favor of his community; a devoted Christian, he helps people who are addicted to drugs, for which he was bestowed a recognition by Arizona's congressional district. In turn, he strives to encourage people to dream about something, pursue those dreams, and work hard for whatever it is that they want to do. As a further testament to his success, Mr. Garcia's restaurant has been honored across numerous publications and platforms, such as being featured among the "100 Restaurants of the Valley" by the Phoenix News Times from 2019 to 2020, "10 Best Dishes" and "The Best Things to Happen in the Valley" by the Phoenix News Times in 2019, "Best 50 Restaurants in the Valley" by ABC News, and many others.

Looking toward the future, Mr. Garcia hopes to open an even bigger restaurant, through which he can provide work for more families, and inspire others with his inspiring story. A man of faith and family, with two children—Carla and Gabriel, who has overcome several hurdles to find success and happiness, he wishes to impart the following advice to others: "It doesn't matter what people say about you…keep trying, and one day you will get it." 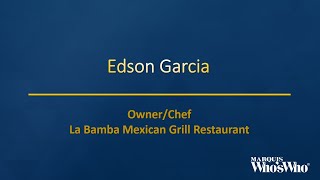