After serving as a teacher for three decades, she returned to the family funeral and cremation business

SUN CITY WEST, AZ, June 04, 2021 /24-7PressRelease/ -- Karen L. Darby-Ritz has been included in Marquis Who's Who. As in all Marquis Who's Who biographical volumes, individuals profiled are selected on the basis of current reference value. Factors such as position, noteworthy accomplishments, visibility, and prominence in a field are all taken into account during the selection process.

Over the course of her prolific and accomplished career, Karen L. Darby-Ritz has excelled within two very different professional paths. Upon retiring after three decades as a beloved teacher, she shifted gears and has since found success as the general manager of Camino del Sol Funeral Chapel & Cremation Center, an Arizona-based family business founded by her father. With a love for helping others and a great ability to guide people through difficult situations toward success, Ms. Darby-Ritz has found her seemingly disparate career journeys both extremely rewarding.

Although her current role is a natural one for her, Ms. Darby-Ritz—who worked at the funeral company all throughout her upbringing—was not inspired to enter the family business full-time by the time she graduated from high school, much to her father's disappointment. Seeing her father, James "Big Jim" Darby as a mentor, as he continually motivated and inspired her and was always there to listen to any issues she had, she explained to him, "Dad, I want to go to college, but I don't want to work in the business. I want to be a teacher." According to her father, as he writes in his book, "One of the reasons for owning your own company is to pass that legacy down to your children, to watch them grow and change the business. I think I always assumed that all of my children would want to be a part of this business…The funny thing about our children is they have minds of their own." When his oldest daughter told him that she wanted to take a different route with her life, he noted, "I was having a hard time grasping that, but I realized that I had to let her go. Secretly, I kept thinking she'd be back, and I was right."

Upon graduating from college, Ms. Darby-Ritz launched her career as an educator at Peoria Unified School District, which ended up lasting for 30 years—during which time she was motivated by Charlene Jenk, whom she considered a great female role model for working in education. In the midst of her posts as a special education teacher, counselor, and department chair, she earned a Master of Arts form Northern Arizona University in 1998 and commenced her life in education on a high-note, as she received a Kellis Award for Excellence in Education and recognized as the school district's "Pride of Peoria" in 2012. Reflecting on her teaching career, she is most proud of working with and helping kids with disabilities and their families and believes the skills she developed in the field helped her in her next occupation, "working with families that had experienced loss and help them to navigate the grief world."

As Ms. Darby-Ritz's father, who remains at the head of the company, wrote, "After teaching for 30 years and retiring, she joined the family business…Karen now helps me run Camino del Sol as the Manager." Since 2012, she has been active as an Advanced Planning Manager and is in charge of community relations for the company, and encourages people to take advantage of pre-planning their funerals before they need them so that at the time of their death, matters will not be overlooked.

Outside of her primary endeavors, Ms. Darby-Ritz has maintained strong ties to community initiatives, serving as the president of the AFCCA Foundation for Children, president of Sun City West Alliance of Business and Community, and a volunteer for Eve's Place Community Services—which "provides safety and empowerment services for victims of domestic and sexual abuse." She has also been affiliated with several professional organizations, such as AFCAA, or the Arizona Funeral Cemetery Cremation Association, the National Funeral Directors Association, and CANA, or the Cremation Association of North America. Always family-focused, Ms. Darby Ritz enjoys spending time with her two children and eight grandchildren in her spare time. 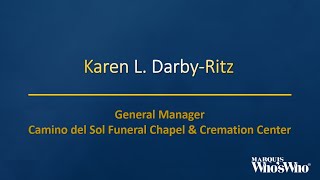