Wm. Roger Louis Honored for Excellence as a Historian

A prolific educator and writer, Mr. Louis has authored and edited numerous books released in every decade since the 1960s

AUSTIN, TX, June 09, 2021 /24-7PressRelease/ -- Wm. Roger Louis has been included in Marquis Who's Who. As in all Marquis Who's Who biographical volumes, individuals profiled are selected on the basis of current reference value. Factors such as position, noteworthy accomplishments, visibility, and prominence in a field are all taken into account during the selection process.

For more than five decades, Wm. Roger Louis has made a name for himself as an internationally-renowned historian and educator, whose expertise has been shared across numerous academic institutions and venues.

Born in Michigan but raised in Oklahoma, Mr. Louis developed a love for learning from a young age and upon graduating from high school, earned a Bachelor of Arts from the University of Oklahoma in 1959, a Master of Arts from Harvard University in 1960, and then a Doctor of Philosophy from Oxford University in England in 1962. While a graduate student of history at Harvard and Oxford, he discovered his passion for the history of the British Empire and quickly decided that would be the focus of his research and teachings as he headed into his career. He found success as an assistant professor-turned-associate professor of history at Yale University between 1962 and 1970, and then became a professor of history at the University of Texas at Austin in 1970, a position he has held for 50 years—in addition to serving as Director of British Studies at the school since 1975. In the midst of teaching, he also obtained an honorary Doctor of Letters from Oxford University in 1979.

Mr. Louis has excelled as Kerr Chair of English History and Culture and a Distinguished Teaching Professor at the University of Texas at Austin since 1985 and 1998, respectively. In 1998, he received a Doctor of Philosophy from Westminster College in 1998. Outside of his primary endeavors, he has lectured on history at the University of Oxford, London School of Economics, Nottingham University, British Academy, University of Connecticut, Rice University, University of Ohio, and in Tel-Aviv. He also served as a Distinguished Visiting Professor at American University in Cairo in 2001, a member of the U.S. State Department Historical Advisory Committee from 2002 to 2008, the founding director of the National History Center from 2001 to 2013, and a trustee for the British Empire Museum from 2005 to 2013. He served as President of the American Historical Association in 2001.

Throughout his accomplished career, Mr. Louis has balanced teaching and lecturing with prolific writing, as the author and editor of countless books released in every decade since the 1960s. These have included "Germany's Lost Colonies" in 1967; "The Congo Reform Movement" in 1968; "British Strategy in the Far East, 1919-1939" in 1971; "Imperialism at Bay" in 1977; "British Empire in the Middle East" in 1984; "In the Name of the God Go! Leo Amery and the British empire in the Age of Churchill" in 1992; "The Oxford History of the Twentieth Century" in 1998; "A Revolutionary Year: The Middle East in 1958" in 2002; and "Serendipitous Adventures with Britannia" in 2019, among numerous others. He also served as editor-in-chief of "The Oxford History of the British Empire" in 1998 and 1999. In light of his achievements in academia, he has been named Professor of the Year for "teaching, research, and service" at the University of Texas in 2009 and as a National Endowment of the Humanities Fellow at the American Institute of Indian Studies, a Guggenheim Fellow, a Visiting Fellow at All Souls college, and an Overseas Fellow at Churchill College; in 2010, he was appointed to the John W. Kluge Center Chair for Countries and Cultures of the North at the Library of Congress.

Mr. Louis has remained connected to his field over the course of several decades as an affiliate of the American Academy of Arts and Sciences, American Historical Association, Council on Foreign Relations, Texas Institute of Letters, Reform Club, Metropolitan Club, Woodrow Wilson International Center, and Royal Historical Society. With his wife of more than 40 years, Dagmar Cecilia Friedrich, he especially enjoys spending time with his two children, Antony Andrew Louis and Catherine Ann Louis. 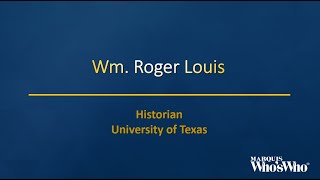