Louis I. Newman Gets the Star Treatment!

Mr. Newman, a renowned matrimonial lawyer, has put his clients first for more than 50 years

NEW YORK, NY, June 18, 2021 /24-7PressRelease/ -- Louis I. Newman has participated in The Star Treatment, a prestigious video series hosted by renowned lawyer and television personality, Star Jones. This premier video series is extremely limited — Marquis Who's Who qualifies 500 listees on an annual basis for this elite service. Backed by a storied career in media that spans more than two decades, Star works closely with Marquis listees to assist with networking goals and commemorative efforts that can be shared with a worldwide audience.

For more than 10 years, Mr. Newman has utilized his five decades-long expertise in matrimonial law as an attorney and a managing partner at Newman Law Group, P.C., a New York City-based firm where he helps his clients through their worst personal moments. A master in the art of negotiation and a renowned voice in his legal field, which has culminated in numerous TV and radio appearances, as well as testifying as an expert witness, he has represented professional athletes, celebrities, and judges in their divorces across New York State. Building a career on ethics, integrity, and honesty, Mr. Newman noted, "For me, it's not just [about] getting the check in the mail…if I can help someone and I can put a smile on their face, there's a reward in that for me. That goes a long a way and it's very satisfying."

Though Mr. Newman's primary passion and skills lie in the law, his foundation as an academic is in accounting and economics, which were the focuses of his studies when he attended Queens College in his youth. Upon graduating with a Bachelor of Science in Accounting in 1965, however, he felt there was "something missing" as he wanted to help others beyond merely crunching numbers. He was able to fill this void with law, and subsequently earned a Doctor of Jurisprudence from New York Law School in 1967. Admitted to practice law in the state of New York, as well as the U.S. District Court for the Southern, Eastern, and Western Districts of New York, the U.S. Court of Appeals for the Second Circuit, and the Supreme Court of the United States, he gravitated toward matrimonial law because it was an unpopular practice all those years ago. Right out of law school, none of his fellow lawyers wanted to focus on matrimonial cases—everything from divorces to prenuptials to co-habitation agreements to separation agreements and custody issues—so they were all referred to Mr. Newman, which allowed him to truly help those who really needed it. In addition, his background in accounting has greatly benefitted him in his practice. For one, when it comes to the economics and unwinding of divorce, it's likely that accountants or business appraisers will be called in to testify and most of them aren't used to being cross-examined by an attorney who can use terminology they understand, perhaps forcing them to answer question they might otherwise not want to answer. Secondly, Mr. Newman has found that his accounting background has been helpful in guiding clients and structuring a settlement, as "you can deal with the economics of what and how the dollar should be divided."

In addition, Mr. Newman has been called upon himself to testify as an expert witness in regards to New York divorce law and has participated as a panelist in continuing legal education courses. Throughout his illustrious career, he has maintained affiliations with numerous professional organizations, such as the New York State Bar Association's family law committee, the New York County Lawyers Association's matrimonial law committee, and the American Bar Association's family law section. He has lent his decades of experience as an author and contributor to numerous esteemed legal journals and other publications, and has made appearances on "Larry King Live," CNN News, CBS News, NBC News, and various radio talk shows regarding matrimonial law. A standout moment came while he was on "Larry King Live" when he debated high-powered lawyer Alan Dershowitz on the topic of the Woody Allen-Mia Farrow situation. Guided by an ethical backbone, he was also interviewed on CNN about prenuptial agreements, during which the journalist asked him, "What does the client generally say?" to which he pointed out that "More often than not, it's the wealthy parents who will call me to tell me that a child is getting married and they really want to protect the family money. My response has traditionally been: if your child is old enough to get married, your child is old enough to pick up the phone and call me."

When it comes to his moral ground, Mr. Newman has said that "When you stand before a judge, the judge comes to know who is telling them the true version and who is not, and it's important in representing a client that the court has respect for the attorney." And while it's not always easy to do, especially in sensitive cases such as divorce and custody battles, he has always been very clear and direct with his clients. "They know they're going to get the answer, it may not be what they want to hear, but I have an obligation to tell them what they need to hear. My toughest job has been protecting the clients from themselves." Looking toward the future of his field, he advised budding matrimonial lawyers to consider the stress and hard work of the job at hand before committing to it. While he sees it as a rewarding and honorable position, he also admitted to being extremely "draining" because "while we go home at night, we still carry our clients' problems with us. In the matrimonial arena, you become the mother, the father, the brother, the sister, and the clergy to your clients." He advised young attorneys to be prepared for what the field will require of them—"It's not a nine-to-five job, plain and simple," but, he noted, it's all worthwhile "if you can help somebody." 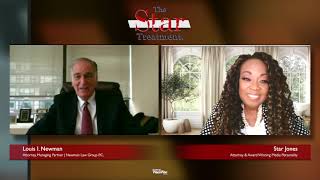