Ms. Arnecke has served as the owner of E4 Cattle Company since 2006

VICTORIA, TX, June 21, 2021 /24-7PressRelease/ -- Sherilyn Arnecke has been included in Marquis Who's Who. As in all Marquis Who's Who biographical volumes, individuals profiled are selected on the basis of current reference value. Factors such as position, noteworthy accomplishments, visibility, and prominence in a field are all taken into account during the selection process.

Through hard work, determination, and a lifelong exposure to the cattle business, Sherilyn Arnecke has excelled in an industry that has been predominantly steered by men. However, the longtime owner of the family-operated E4 Cattle Company has paved her path—which consists of a 1600-acre ranch—with gusto. "Don't let anything hold you back," she said. "Get out front and stay out there."

Growing up in Texas, Ms. Arnecke was mentored by her grandfather, Freddie Schmidt, who had no grandsons and relayed all his tutelage and navigation on the cattle ranch to her throughout her upbringing, making her his 'honorary grandson.' Although her family on her mother's side has consisted of cattle ranchers since 1850—arriving in Texas's Victoria County in 1857—and, as he put it, "cows run in her blood," she was initially stubborn in accepting the fact she couldn't do this type of work. But she ultimately attributes the success of her career to this early mindset as it pushed her to get her foot in the door and grasp how to handle the animals herself.

Being around bulls and heifers from a young age, she knew she was destined to carry on the torch within her family, but that didn't stop her from pursuing a higher education. In 1970, she studied English at Texas's Victoria College.

As the owner of E4 Cattle Company since 2006, Ms. Arnecke raises registered Black Angus cattle, as well as crossbreed cattle. Additionally, she keeps track of which bulls bred which cows; makes sure the calves are healthy and the cows are milking well and that there is plenty of grass and water around; monitors solar pumps and water sources; utilizes rotational grazing for three to four days a week; and eventually sells her bulls. Her son and daughter, Kelly and Stacy, each have their own operations—they're focused on cross-breeds, selling at action rings, and overall are heavily involved in cattle. Their daughters, Ms. Arnecke's three granddaughters, are also set to follow the same path. Upon reflection of her life in this male-dominated industry, she is most proud of being a vocal leader who always speaks her mind and merely being able to do well in the business; as she said, 99 percent of her buyers are men and it has meant a lot to her to be accepted in the "Angus world" as a breeder and seller and trusted to deliver a product they're looking for. "It is not easy making it in a man's world," she noted.

Outside of her primary endeavors, Ms. Arnecke has also served as the first woman member and director of Victoria Soil and Water Conservation District since 2015 and a volunteer for the Zion Lutheran Church of Mission Valley. In addition, she has remained connected to her industry as a longtime affiliate of the American Angus Association, the largest beef breed organization in the United States. Looking toward the future, Ms. Arnecke plans to travel more with her husband, Calton, while her children help out on the ranch. 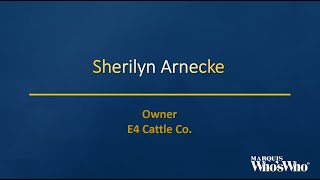