Mary Scott Gets the Star Treatment!

With a unique and open-minded approach to the law, Ms. Scott strives to help all people in and out of the courtroom

PONTE VEDRA BEACH, FL, June 25, 2021 /24-7PressRelease/ -- Mary Scott has participated in The Star Treatment, a prestigious video series hosted by renowned lawyer and television personality, Star Jones. This premier video series is extremely limited — Marquis Who's Who qualifies 500 listees on an annual basis for this elite service. Backed by a storied career in media that spans more than two decades, Star works closely with Marquis listees to assist with networking goals and commemorative efforts that can be shared with a worldwide audience.

Throughout an accomplished and rewarding career in law that has spanned nearly 20 years, Ms. Scott has focused her expertise on commercial and civil litigation matters, as well as real estate disputes, special assets, commercial debt collections, and construction lien law. As president of her own firm, Mary Scott Law, since 2017, she has taken pride in providing advantageous solutions to her clients' problems as quickly as possible through her knack for critical and strategic thinking, perseverance, and creating an inclusive environment for all. Prior to her current role, she excelled as a litigation attorney at Smith, Gambrell & Russell, LLP and then a commercial litigation and real estate litigation attorney and partner at McCabe Law Group, P.A., between 2013 and 2017. She launched her career and honed her skills as an associate for several firms, including Joseph & Marees, P.A. and Fowler White Boggs P.A.. A gifted attorney who fights for the rights of the underserved, she has also found much success as a contributor to the Human Rights Committee and the Junior Achievement and Scholarship Committee for the Meninak Club, a youth-geared organization that provides "help where none is available," such as low-income school areas, since 2009. Each year within the club, she serves on a charity project committee, which provides a $40,000 grant to applicants.

While Ms. Scott's professional journey and achievements therein have proven that she was born to do this kind of work, she initially was on the path toward a medical career. With a family background in medicine, she pursued the profession until she wound up with poor grades in organic chemistry, at which point she decided to reevaluate her future. Upon earning a Bachelor of Science from the University of Alabama in 2000, she set her sights on the legal system and ultimately graduated with a Doctor of Jurisprudence from Tulane University Law School in 2003. Having been taught critical thinking and encouraged to be different at a young age, she has taken an effective, open-minded, and unique approach to the work at her firm—custom-tailoring legal strategies to the client and delivering ideal results for them. She also simply gets to know her clients well before the professional "clock starts ticking." In her words, "We all know that clients choose their lawyer, but the same is true the other way. Lawyers need to be selective on who they choose to have as their clients, and I find that you really get more benefit out of that process if you take the time to do that before the client is actually paying you [in order] to figure out who they are and what their case is all about."

Not just a lawyer, but a litigator and a trial attorney, she handles a variety of cases within her practice, including ones involving complex business, civil, and real estate disputes; in the courtroom, she has taken pride in being able to read and understand people, from members of the jury to those on the witness stand. Additionally, she finds good trial lawyers must possess the ability to listen, saying, "You get a lot of information when you really listen to people and so maybe that's one of my secret weapons." Outside of her primary legal endeavors, she pours her time and energy into pro bono work, as well, which she considers to be extremely important in her field. She previously served as president of the Jacksonville Women Lawyers Association, whose mission is to guide and mentor young female attorneys, and has maintained memberships with the Jacksonville Bar Association, Jacksonville Beaches Bar Association, and Small Business Resource Network.

Speaking directly to the future generation of lawyers, Ms. Scott urged the importance of keeping one's integrity intact and ego in check. "Remember you're in a service industry," she said. "Be you and be the best you that you can be, and don't let anyone tell you who you are." 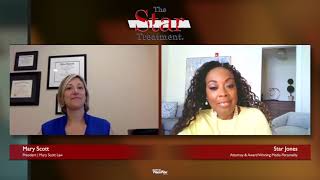