Dr. Romero has dedicated nearly three decades to the intersection of science and medicine to create a better, stronger, and healthier future for all.

TUCSON, AZ, June 28, 2021 /24-7PressRelease/ -- Klaus Romero, MD, MS, FCP has participated in The Star Treatment, a prestigious video series hosted by renowned lawyer and television personality, Star Jones. This premier video series is extremely limited — Marquis Who's Who qualifies 500 listees on an annual basis for this elite service. Backed by a storied career in media that spans more than two decades, Star works closely with Marquis listees to assist with networking goals and commemorative efforts that can be shared with a worldwide audience.

Over the course of an accomplished career that blends medicine, science, and innovation, Dr. Romero has excelled as a physician, an educator, a researcher, and an administrator with a special focus on clinical pharmacology, quantitative medicine, epidemiology, and data science for nearly 20 years. In his current role, he serves as the Chief Science Officer of the Critical Path Institute (C-Path), based in Tucson, Arizona —a nonprofit, public-private partnership with the Food and Drug Administration that aims to "accelerate the pace and reduce the costs of medical product development" through the generation of actionable data-driven solutions. Prior to advancing to this position, which he has held since 2020, he built his reputation at the organization as Director of Clinical Research, Director of Clinical Pharmacology, and the Executive Director of Clinical Pharmacology and Quantitative Medicine—all between 2007 and 2020. Through his roles at C-Path, Dr. Romero's unique contributions to the fields of clinical pharmacology, epidemiology, data science and quantitative medicine have helped transform the process of medical product development. Key achievements of his career include significant contributions to the fields of polycystic kidney disease, tuberculosis, Alzheimer's disease, type 1 diabetes, Parkinson's disease, Duchenne muscular dystrophy, Huntington's disease, and various other rare and orphan conditions.

Attributing his own success to passion, drive, discipline, a love for learning, and a goal to create new paradigms within his field, Dr. Romero began paving his professional path from a young age. Growing up in Bogotá, Colombia, he developed an early interest in science and medicine, which led him to pursue a higher education in these fields. He attended the Xavierian Pontifical University, where he obtained his medical degree in 1999, followed by training in clinical pharmacology at the Colombian National University in 2004, and training in epidemiology at the Colombian Academy of Medicine in 2006.

It was in medical school where Dr. Romero fell in love with the discipline of clinical pharmacology, which he saw as "a vector to solve clinical problems for individual patients, as well as for broader populations." This led him to integrate clinical pharmacology methods used to describe how drugs move to the body and hit specific disease targets, with epidemiology methods used to describe how diseases move through populations. He then became involved in the field of data science, an intersection that has fueled a majority of his professional success in modern scientific innovation and has had significant impacts on the lives of countless patients. He noted, "you need smart data to be able to understand how a disease behaves in a population and how you can intervene with different treatments…and expedite the development and evaluation of the efficacy and safety of new treatments for those diseases."

Early in his career, Dr. Romero adapted a mathematical model used in epidemiology to understand the behavior of infectious diseases, to better understand the behavior of adverse reactions to medications. It was while presenting this innovative method at the 2007 annual meeting of the American College of Clinical Pharmacology that he met C-Path's founder, Dr. Raymond Woosley, who recruited him to join the organization that has become his professional home for more than 10 years now.

Beyond his primary endeavors, he has excelled in the capacities of Chairman of the Board at CredibleMeds Inc., since 2017. Dr. Romero also serves as Associate Research Professor at the University of Arizona, Adjunct Professor at the Arizona State University, and Adjunct Professor at the University of Southern California. He has also lent his expertise as a volunteer at the Kim Integrated Health Management Initiative, whose mission has been to improve the well-being of communities affected by rare diseases in Colombia. Dr. Romero has also found much success in the form of written works, having served on numerous editorial boards for scientific publications in the field, including Alzheimer's and Dementia: Translational Research and Emergency Medicine and Critical Care. He has also authored, co-authored, and edited several books, book chapters, and peer-reviewed articles related to his areas of expertise.

As a testament to his impactful work in the scientific and medical fields, Dr. Romero has been recognized with numerous accolades, the most recent honor being the Professional Dedication Award for "10 Years of Dedicated Service and Outstanding Accomplishments" from the Critical Path Institute in 2018. Others include the Alzheimer's Annual Imaging Biomarkers Award from the Coalition Against Major Diseases in 2015, and the CAMD "Annual Recognition" Award for "Leadership and Dedication in Advancing Drug Development for Neurodegenerative Diseases" in 2011, among others. He has been a longtime affiliate of many professional organizations over the years, as a fellow of the American College of Clinical Pharmacology, as well as a longstanding member of the International Society for Pharmacoepidemiology, and the American Society for Clinical Pharmacology and Therapeutics. Most notably, Dr. Romero is a founding member of the International Society of Pharmacometrics—formed in 2011.

Upon reflection of his astonishing professional life, Dr. Romero is humbled by the work he has been involved with and looks forward to a future where even more impact can be made. He hopes people will walk away with an appreciation "for the power of the modern world to strive to inform decision-making through the proper understanding of the value of data…and critical thinking. The intersection of data science with daily life and with medicine will continue to transform the world." 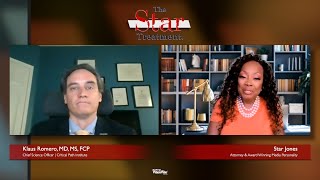