Commencing his dentistry career in the military, Dr. Añonuevo now excels out of his own practice, Inspire Dentistry of the Carolinas

He is doing his part to change the world for the better one smile at a time.

CHARLOTTE, NC, June 30, 2021 /24-7PressRelease/ -- Charles Paul T. Añonuevo, DDS has been included in Marquis Who's Who. As in all Marquis Who's Who biographical volumes, individuals profiled are selected on the basis of current reference value. Factors such as position, noteworthy accomplishments, visibility, and prominence in a field are all taken into account during the selection process.

For more than a decade, Charles Paul T. Añonuevo, DDS has dedicated himself to helping people smile through his accomplished career as a general practice dentist, as well as volunteer services for those who need care most.

Born in the Philippines and raised in Chicago, Dr. Añonuevo was able to see firsthand the impact that the dental profession can make on people, as his mother was a dentist. He couldn't help but gravitate toward dentistry, noting that it is of great significance on a person's life "to treat them physically with their health and emotionally with their smile." Additionally inspired by his father, a proud business owner in civil engineering, he set out to forge a path for himself on which he could combine his parents' influence and skills his own way. Upon earning a Bachelor of Science in Molecular Biology, with a minor in psychology, from Benedictine University, he obtained a Doctor of Dental Surgery from the University of Illinois at Chicago College of Dentistry in 2006.

Dr. Añonuevo excelled as a general practice dentist and an officer for the U.S. Army between 2006 and 2014, lending his services to soldiers in Fort Bragg, North Carolina, Iraq, and Fort Gordon, Georgia. He also found success as an associate dentist at Spring Lake Dental Group, Carolinas Family Dental Care, and Carolina Dental before ultimately reaching his crowning professional achievement when he opened his own practice, Inspire Dentistry of the Carolinas. After 11 years as a dentist, he decided to run his own office to advance the clinical aspect of treating patients and also improve the business of dentistry overall. Compassionate and innovative, Dr. Añonuevo has built a comforting and successful environment geared toward full spectrum dentistry to include but not limited to hygiene, dental implants, orthodontic aligners and surgery. He attributes his success to the Inspire Dentistry staff and extremely grateful for a team that strives to make the lives of those in the community better.

Outside of his primary responsibilities, Dr. Añonuevo has found the time to contribute his abilities in dentistry to several causes and organizations, including Give Back a Smile through the American Academy of Cosmetic Dentistry, Agape Dental Ministry, ReachOut Healthcare America and military events for North Carolina Dental. He also hosts blood drives with the American Red Cross and One Blood. He has also been an active member of the Greater Charlotte Study Group and South Charlotte Study Group for Continuing Education. Over the course of his accomplished and busy career, he has maintained his affiliation with such groups as the American Dental Association, Academy of General Dentistry, American Dental Education Association, North Carolina Dental Society, Charlotte Dental Society, North Carolina Academy of General Dentistry, North Carolina Dental Association, American Academy of Clear Aligners, and Charlotte Dental Association, among many others. In recognition of his accomplishments and selflessness, Dr. Añonuevo received the Army Commendation Medal in 2008.

Hoping to be remembered by his peers and patients as someone who was friendly and dependable, Dr. Añonuevo has summarized his life's work so far as being about finding fulfillment in serving people. On that note, he advised that future generations of professionals should seek ways to make the world better, saying, "Do something that you like to do and find the reward in helping others." In the next few years, Dr. Añonuevo hopes to open up different types of health clinics and community service facilities in order to extend his reach. He is doing his part to change the world for the better one smile at a time. 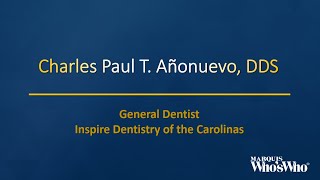