Kenneth W. Braswell is Renowned for His Work in Restoring Family Dynamics

Mr. Braswell flourishes as the as chief executive officer of Fathers Incorporated

SANDY SPRINGS, GA, July 07, 2021 /24-7PressRelease/ -- Kenneth W. Braswell has been included in Marquis Who's Who. As in all Marquis Who's Who biographical volumes, individuals profiled are selected on the basis of current reference value. Factors such as position, noteworthy accomplishments, visibility, and prominence in a field are all taken into account during the selection process.

For three decades, Kenneth Braswell has devoted his career to serving and developing communities, working to strengthen the state of affordable housing, and bolstering family relationships. He has served in his primary role as chief executive officer of Fathers Incorporated—a renowned nonprofit whose mission is to provide professional development, organizational capacity, and direct service to ensure fathers contribute to the healthy well-being of their children. With authenticity, transparency, and great compassion, Mr. Braswell carries on his goal to build "stronger families one father at a time."

Of course, Mr. Braswell's professional quest was not an out-of-the-blue one. Growing up in Brooklyn Crown Heights, he was raised by a single mother, and had no relationship with his father at all. From those formative years, he knew how difficult and traumatic such a dynamic was for children, and set out to reduce as many fatherless childhoods as possible through his work. In 1990, with an academic background in computer science, language writing, and database building from his time at Albany Business College, he began working for Dr. Jack Conway, who held an administrative title within the New York State Department of Housing and Community Renewal. In addition, Dr. Conway was a technical writer and a professor who had received his master's and doctoral degrees from Brown University, with a focus on anthropology among Native Americans, Irish Americans, and African Americans. He regaled Mr. Braswell with stories about growing up in a political household, in which impactful leaders like Malcolm X would have discussions with his father about issues of the day. After a while, Mr. Braswell noted, he felt like "this white, redheaded Irishman knew more about black history than I did." So he began going to the library, reading more books, and getting involved in book clubs around these subjects. Mr. Braswell soon became involved in an organization called the Empire State New York African American Arts Festival, led by his mentor Diana Ritter, through which he fell in love with community service and found the path he's been on ever since.

Mr. Braswell served as vice president of the Urban League of Northeastern New York, Inc. from 1996 to 2000 before finding success as the publisher and executive editor of the Urban Voices newspaper from 2000 to 2004. Through Fathers Incorporated, which was established in 2004, he has strived to assist fathers who do not have a voice and struggle to understand the system, working to "change the current societal and cultural definition of family to be inclusive of fathers." Furthermore, the organization has expanded to working with leaders of the White House, Congress, and the U.S. Department of Health & Human Services, as well as other institutions around the world, to identify and advocate for social and legislative changes that lead to healthier father involvement with children, no matter what the father's marital or economic status or location is. Due to the group's success, he has received national and international recognition—most recently by Oprah Winfrey on a program titled "Honoring Our Kings, Celebrating Black Fatherhood" in June 2021.

In addition, he has taken on the roles of Director of New York State Fatherhood Initiative from 2006 to 2010, board member for Fathers & Families Coalition of America from 2007 to 2010, member of the National Fatherhood Leaders Group from 2009 to 2014, and has been Executive Director of the National Responsible Fatherhood Clearinghouse since 2009. Outside of his primary titles, he has been a member and contributor to several groups, including the National Campaign to Prevent Teen and Unplanned Pregnancy; the National Black Child Development Institute; and the National Association for Family, School, and Community Engagement, among several others. He has also lent his expertise as a contributor to the Albany, NY based of YMCA of the Capital District, Boys & Girls Clubs of America, Sesame Street Communities and the Annie E. Casey Foundation. Over the course of his robust career, he has been recognized with a Manifest Award by Ebony Magazine, a Atlanta Business Chronicle Small Businessman Award, a Corporate Citizenship Award, and honored as a Black Enterprise Man of Distinction.

Happily married with six children and two grandchildren, Mr. Braswell looks upon his life, career, and accomplishments with great pride and gratitude; he's driven by his own children to make sure every man has the ability to see and experience the achievements of their offspring. Looking toward the future, he hopes Fathers, Incorporated grows further and infiltrates nationally; he also hopes that future generations understand "you can do anything you put your mind to. You can do anything you want to do in life as long as you commit and focus." 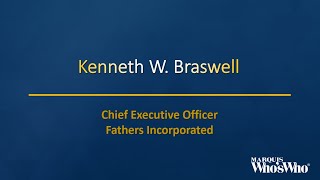