Dr. MacKinnon is proud to form connections with patients and students

TROY, MI, July 09, 2021 /24-7PressRelease/ -- Gordon E. MacKinnon, PhD has participated in The Star Treatment, a prestigious video series hosted by renowned lawyer and television personality, Star Jones. This premier video series is extremely limited — Marquis Who's Who qualifies 500 listees on an annual basis for this elite service. Backed by a storied career in media that spans more than two decades, Star works closely with Marquis listees to assist with networking goals and commemorative efforts that can be shared with a worldwide audience.

An accomplished clinical professor, Dr. MacKinnon actually got his start as a graphic artist and illustrator for the automotive industry. While working by day for General Motors, he studied by night to become a marriage and family therapist. Tragedy struck in 1987, when a plane crashed in Detroit. Unbeknownst to Dr. MacKinnon, that plane carried four of his colleagues who were engineers. Sadly, those men lost their lives in the crash. A fifth engineer, who was scheduled to be on that flight, but had missed it, subsequently found himself suffering from survivor's guilt. The experience of speaking with this engineer reinforced Dr. MacKinnon's decision to become a therapist and help others through traumatic circumstances. It also motivated him to join the ministry to help people find meaning for their lives.

As a survivor of prostate cancer since 2005, Dr. MacKinnon has been working with other cancer patients and survivors, helping couples affected by the disease to find ways to communicate effectively and support each other through the difficult moments of treatment. As Star noted, a large part of Dr. MacKinnon's work is the human connection he is able to form with patients and students. This connection works both ways, as Dr. MacKinnon would later experience. "I think my patients teach me, maybe sometimes a lot more than I teach them," he acknowledged, and he considers this a wonderful aspect of his profession. "It's a testament to your ability to continually learn, even in an area… where you are clearly an expert." Rather than seeing himself as a "power broker" for his patients, Dr. MacKinnon views his role as supplying alternative ways of thinking to them.

When asked about the proudest moments of his career, Dr. MacKinnon reflected on a long career of success, but settled on a few gems. The first was when he graduated with a PhD, becoming the first member of his family to do so, and the second was receiving a Distinguished Faculty of the Year award from Rochester University in 2014. Another proud moment of his career came when he was working with a prostate cancer support group. One of the members asked him, as the moderator of the group, "how much time do I have left?" Rather than answer the man's question directly, Dr. MacKinnon challenged the man to focus not on the finite time he might have left, but how to find meaning with the time he had. In so doing, Dr. MacKinnon imparted the importance of living with purpose and discovering the best way to serve others.

Outside of work, Dr. MacKinnon enjoys a wide variety of unusual hobbies, including operating a 19th century printing press, growing bonsai trees, and practicing as an amateur magician. Such was the novelty of these hobbies that Star named him a Renaissance man. As a boy of 10, Dr. MacKinnon worked with his grandfather on weekends, helping him operate a printing press out of his garage. When he passed away, Dr. MacKinnon's grandmother put him in charge of the print shop, and through that experience he learned valuable lessons on how to work with people and run a business. He would later purchase his own press at age 16, using the machine to create wedding invitations for friends. After awhile, he moved on to other projects, and the press sat dormant for 41 years, until his daughter asked him to print invitations for her wedding. His mother was the one who encouraged Dr. MacKinnon to begin growing bonsai trees, and it was a hobby he continued throughout his adult life. As for magic, while it started as a general interest, he later used it as a ministry tool, using magic to teach object lessons to others.

Overall, Dr. MacKinnon feels that it is important to have at least one person in life who understands your story, who knows and appreciates you. He is proud to have served that role in the lives of so many people throughout the years, and it is precisely for that caring and compassionate attitude that he is deserving of the Star Treatment. 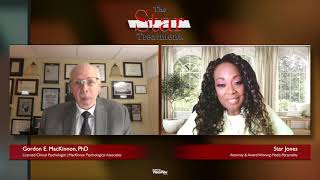