Boasting an illustrious career, Dr. Khan has received a Certificate of Merit Award and Certificates of Appreciation from the American Society of Civil Engineers

MOORESTOWN, NJ, July 13, 2021 /24-7PressRelease/ -- Mohiuddin Ali Khan, PhD, PE has been included in Marquis Who's Who. As in all Marquis Who's Who biographical volumes, individuals profiled are selected on the basis of current reference value. Factors such as position, noteworthy accomplishments, visibility, and prominence in a field are all taken into account during the selection process.

Driven by a lifelong passion for construction, physics, and mathematics, Mohiuddin Ali Khan, PhD, PE has built an accomplished career as a structural engineer, business leader, educator, researcher, and author. Inspired by his scientific heroes, Albert Einstein and Isaac Newton, he has been proud to follow in their footsteps and carve out his own impact in the fields of science and technology over the course of nearly five decades.

As a young boy growing up in India, Dr. Khan had many prominent figures in his life to look up to, including his four siblings, all of whom became medical doctors. Naturally, the sciences loomed large in his environment, and he gained an interest in the subjects of Newton's Law, physics, mathematics, and medicine from a young age—in addition to engineering, which he gravitated toward through the concepts of building bridges, dams, and powers stations. Balancing his loves for medicine and engineering, he ultimately selected the latter as his primary focus by the time he entered high school. As he furthered his education, he was exposed to influential and encouraging teachers and tutors, as well as their academic theories, pushing him even more to want to contribute to the field professionally. Upon earning a Bachelor of Engineering from NED University of Engineering & Technology in Pakistan in 1961, he subsequently obtained a Master of Philosophy in Structural Mechanics from the University of London. He then received a scholarship to Imperial College London, also known as Imperial College of Science, Technology and Medicine, a prestigious public research school where he was mentored by a great professor of his, Al Baker, and became one of the youngest students in his graduating class, ultimately earning a postgraduate diploma. Dr. Khan, who also received a Doctor of Philosophy from the University of Southampton in 1972, considers his time as a student at Imperial College to be a highlight of his life.

After English, Dr. Khan relocated to the United States, where he was invited to work on building nuclear power plants; in doing so, he was provided with a green card and expenses. The work was exhausting, taking up to six days a week for about five years, after which point he received a pension. As he continued on in his professional journey, he found success as a researcher at Northwestern University in Illinois, as well as head of the engineering faculty and acting chairman of the Civil Engineering Department at NED University of Engineering & Technology. Between 1999 and 2018, he served on the adjunct faculty at Temple University. He was motivated to start his own engineering consultation company as far back as 2005 when a 7.2-7.5 earthquake hit India and Pakistan left 100,000 people killed and several schools destroyed. The American Society of Civil Engineers, with which he was affiliated as a researcher and publisher of papers, many of them surrounding earthquake science, was soon advised by the U.S. government to aid the region that was affects; he and about just a few others were selected to lead the cause. He went to the sites for about three weeks to a month and found the buildings were not structurally equipped to handle a natural disaster, and so he helped launch an engineering course for those who lived and work there. Dr. Khan wanted the people there to have the knowledge needed for future buildings, which took about nine to 10 months; he published papers on the work they did and was encouraged to help other engineers through his own business, which he formed in 2011.

Outside of his primary roles, Dr. Khan has lent his expertise as a volunteer structural group chairman of the Philadelphia Section of the American Society of Civil Engineers, a member of the advisory team for the American Society of Civil Engineers, and editor of the International Research Journal at NED University. Additionally, he has authored numerous research papers for international journals since 1967, as well as many books and journal articles. His published works include "Rehabilitation and Repair of Bridges and Highway Structure" in 2010, "Transportation Engineering Handbook" in 2011, "Elsevier (B-H) Earthquake-Resistant Structures" in 2013, and both "Flood Scour for Bridges and Highways: Prevention and Control of Soil Erosion" and "Accelerate Bridge Construction" in 2015. Over the years, he has given lectures to practicing engineers, supervised Master's and PhD theses, and attended and organized numerous structural conferences. In recognition of his myriad achievements, he has received numerous academic awards from professional organizations, such as a Certificate of Merit Award and Certificates of Appreciation from the American Society of Civil Engineers; a SEI Chapter of the Year Award from the SEI Philadelphia Chapter of Structural Engineering Institute in 2014; and a Merit Essay Award from the Institution of Civil Engineers in England in 2017. Dr. Khan has also been an invited guest at the President's Dinner at the Washington Convention Center in 2006 and an invited attendee of the Inaugural Reception and Dinner of World Peace and Prosperity Foundation in 2007.

Happily married with three children, Dr. Khan hopes to advise budding engineers and scientists to get a good education, take an interest in the scientific aspects of the field, and be mindful of climate change, and the works of Einstein and Newton. In other words, he noted, "Develop a huge wealth of knowledge." 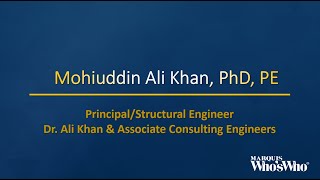