Dr. Wang teaches an evidence-centric view of Christianity, backed by an understanding of original Biblical languages

PLANO, TX, July 26, 2021 /24-7PressRelease/ -- Dr. Joseph Shou-Jen Wang has participated in The Star Treatment, a prestigious video series hosted by renowned lawyer and television personality, Star Jones. This premier video series is extremely limited — Marquis Who's Who qualifies 500 listees on an annual basis for this elite service. Backed by a storied career in media that spans more than two decades, Star works closely with Marquis listees to assist with networking goals and commemorative efforts that can be shared with a worldwide audience.

A devout Christian and dedicated religious educator, Dr. Wang (Ph. D., Professor Emeritus of New Testament, Asbury Theological Seminary) proudly teaches his faith to students. He is incredulous of others who dismiss Christianity as a collection of superstitions – in his own experience, there are objective evidences that prove the validity of his religion, and it is these evidences that he focuses his lessons on. Whereas some scholars refer to the works of Jesus as "miracles," Dr. Wang noted that the apostle John calls these "signs." This distinction is key in Dr. Wang's view, as it is indicated that there were many such signs that were not recorded in Biblical texts.

Dr. Wang's experience as a Christian living in Taiwan was an interesting one, as that faith makes up less than five percent of the total population. As a young man, he was fascinated by the concept of "righteousness," which, as he points out, is different from guiltlessness, or having no sin, but instead is characteristic of having a good relationship with God, Christ and other Christians. He also became interested in the notion of soteriology, or the study of religious doctrines of salvation. These doctrines emphasize the purging of all negative factors from a person's life, as well as positive blessings from God. Once a person begins to sin, that sin becomes a powerful influence on that person's life, so it becomes progressively more difficult for that person to take control back. By establishing a good relationship with God, Dr. Wang argues, a person can be set free from sin, no matter how deeply he/she has immersed himself/herself within it. The reason this is possible has to do with Jesus' Biblical role as the redeemer of man's sins. Human being originally rebelled against God, and because of this it was not possible to have a good relationship with him, Dr. Wang explained. By sending Jesus down to redeem man's sins, he also opened up the possibility for mankind to be saved from their own sins by enabling them to cultivate a good relationship with him.

When asked why he preferred the New Testament as his favorite section of the Bible, Dr. Wang explained that he is passionate about teaching Jesus' parables. More than that, he is committed to teaching the New Testament in the original Biblical languages, rather than the English translations, so that students can understand what may have been mistranslated or misconstrued from the authors' original intent. To close out the interview, Dr. Wang reiterated that the most important thing for any viewer to take away from the video feature was his deep and passionate belief that Christianity, far from being full of superstition, is constructed of objective facts, and he urges those watching to use those facts to help guide them throughout their lives. With a deep knowledge of Biblical teachings and a passion to spread them far and wide, there can be no doubt that Dr. Wang is deserving of the Star Treatment. 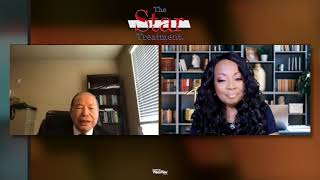