Specializing in invasive cardiology, Dr. Buch excelled as the medical director at Pfizer

FREDERIKSBERG, DENMARK, July 29, 2021 /24-7PressRelease/ -- Jan Buch, MD has been included in Marquis Who's Who. As in all Marquis Who's Who biographical volumes, individuals profiled are selected on the basis of current reference value. Factors such as position, noteworthy accomplishments, visibility, and prominence in a field are all taken into account during the selection process.

Born in Copenhagen, Denmark during World War II, Jan Buch, MD was raised knowing that a future career in medicine was an inevitability, as both his parents—Holger and Inger—were doctors; his father a pediatrician and his mother a general practitioner. Despite an exposure to the world of medicine from an early age, his professional journey was also guided by his lifelong love for the arts, history, reading, and culture. This inherent curiosity about the world around him would shape the kind of medical figure he would one day become. As a renowned expert in cardiology and internal medicine with more than 45 years of field experience to his name, Dr. Buch noted that he has changed and developed in new ways, and constantly evolves his vision, whereas many of his colleagues have not. "You are only old when you stop being curious," he said.

In preparation for his accomplished professional journey, Dr. Buch earned a Doctor of Medicine from Copenhagen University in 1969, in addition to subsequent coursework in anatomy from the University of Manchester and certifications in cardiology and internal medicine. Equipped with a strong education, he launched his primary career at Copenhagen University Hospital, where he served as a physician and cardiologist focused on patient treatment from 1969 until 1987. In that time, he also provided services within the Department of Cardiology and Aviation Medicine at Rigshospitalet in Copenhagen, one of the largest hospitals in Denmark and the most highly specialized hospital in that city. He held his initial post there from 1969 until 1975, at which point he began a two-year residency in medicine and surgery at a healthcare-oriented site owned by the Danish Deaconess Community. Following this appointment, he returned to Rigshospitalet and its cardiology department, as well as its invasive laboratory, from 1977 to 1983. He then worked for three years in the Medical and Cardiology Department at Amtssygehuset in Glostrup, while simultaneously excelling as a specialist in internal medicine and cardiology at Copenhagen University.

In 1987, Dr. Buch began what would become a remarkable and hugely impactful chapter in his career when he accepted the role of Medical Director at Pfizer, where his responsibilities included writing the protocol on prescription drugs centered on heart disease and related ailments, planning the statistical analysis for the medicine, and administering them. He also conducted several studies in hypertension and hypercholesterolemia and holds the patent for Pfizer's Caduet, an effective medicine treats both high blood pressure and high cholesterol, which, during its best years, sold for more than $400 million in revenue. Throughout his decades at the company, he also found success as the Global Team Leader of Cardiovascular Metabolic Endocrine Obesity from 1992 to 2009 and a consultant in cardiology from 2009 until his professional retirement in 2015. Upon reflection of his time there, Dr. Buch is profoundly proud of his own development as a cardiologist and considers being a good "patient-doctor" and a craftsman in cardiology, specifically invasive cardiology to be a highlight of his career.

Outside of his main endeavors, Dr. Buch also lent his culminated experience and knowledge as an instructor of medicine in England, United Kingdom, Sweden, France, and the United States. He has also been a prolific lecturer, with many of his presentations revolved around his affinity for ancient Japanese culture, specifically on woodblock print books; he possesses the largest private collection of these books in Scandinavia, owning 2,000 volumes from before 1868. In recognition of his hard work and enormous significance on his field, he has received numerous grants from the Danish Cardiological Society every year he spent at Copenhagen University, from 1969 to 1987, and a Pfizer Achievement Award from the ASCOT Project in 2005. He served as chairman of the Danish Bibliophile Club from 2015 to 2019, and has held memberships with numerous organizations, including the Danish Society of History, Danish Society of Internal Medicine, Danish Society of Cardiology, Danish-Japanese Society, and Danish Egyptology Society.

Striking the balance between academic leadership and hands-on medical experience, Dr. Buch has navigated his magnificent career with hard work, great skill, and a willingness to take chances and believe in the power of "being at the right place at the right time." In fact, he hopes that the future generation of doctors and scientists understands how crucial mere luck and happenstance is in the medical field. He was committed to his academic work at Copenhagen when he was called upon by Pfizer and, subsequently, open a whole new avenue for himself—which has informed his career advice to others: "Don't be afraid of those decisions because sudden changes can occur in your life, especially if opportunities come up…you don't get anywhere without taking chances." 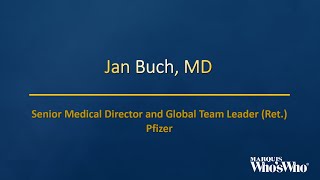