Dr. Palmer dedicated 30 years of teaching astronomy and astrophysics to the University of Chicago

CHICAGO, IL, August 02, 2021 /24-7PressRelease/ -- Patrick Palmer has been included in Marquis Who's Who. As in all Marquis Who's Who biographical volumes, individuals profiled are selected on the basis of current reference value. Factors such as position, noteworthy accomplishments, visibility, and prominence in a field are all taken into account during the selection process.

Patrick E. Palmer has always reached for the stars. With one foot in academia and the other in proactive research and discovery, Dr. Palmer has excelled within his beloved fields of astronomy and astrophysics over the course of a career that has spanned nearly four decades—and has allowed him to explore the vast expanse of space from the ground.

After more than 30 years of teaching astronomy and astrophysics at the University of Chicago, Dr. Palmer was honored with the title of Professor Emeritus in 2006. He first joined the institution as an assistant professor in 1968, and then advanced to an associate professor in 1970 before ultimately being promoted to a full professor in 1975. Teaching such courses as The Physics of Stars and Stellar Astronomy and Astrophysics, his hands-on expertise was unmatched within the department; with a primary interest in star formation, he has accrued years of experience as an independent researcher as well as a pivotal member of several groundbreaking research teams.

In 1969, using radio techniques, Dr. Palmer—who launched his career as a radio astronomer at Harvard University—was involved in the landmark discovery of interstellar formaldehyde, which proved to be the first molecule detected in space; it remains a highlight of his robust career. He would later serve on the team that made the first radio image of a comet, which was Halley's Comet, in 1985. He has also researched planet formation by measuring the motions of natural masers within very small regions with the Very Long Baseline Array, which has also been used to image disks around newly formed stars, and was part of two separate research teams to study two simultaneously approaching comets, NEAT and LINEAR, in 2004.

Outside of his primary endeavors at the University of Chicago, Dr. Palmer has lent his brilliance as a visiting associate professor of astronomy at the California Institute of Technology in 1972, a visiting radio astronomer at Cambridge University in 1973, and a visiting research astronomer at the University of California, Berkeley in 1977 and 1986. From 1980 to 2006, he found success as a visiting scientist at the renowned National Radio Astronomy Observatory, from which he helped discover the polyatomic organic molecule that is formaldehyde. In addition, he has contributed several articles on radio astronomical investigations of comets and interstellar medium to numerous journals and publications.

As a testament to his myriad achievements over the course of his career, Dr. Palmer has received the Bart J. Bok Prize for contributions to galactic astronomy in 1969, was honored as an Alfred P. Sloan Foundation Fellow from 1970 to 1972, and won the Helen B. Warner Prize in 1975. He has previously been a fellow and held many roles within the American Association for the Advancement of Science, served in many capacities in the American Astronomical Society, and remains affiliated with the Royal Astronomical Society and International Astronomical Union.

Dr. Palmer prepared for his incredible life devoted to "the great beyond" by first earning a Bachelor of Science in Physics from the University of Chicago in 1963; when he was entering the college, he initially planned to pursue a degree in electrical engineering but quickly learned that the school did not offer that as a major. Luckily, he proved to be a natural when it came to his backup subject, and had a great mentor in Professor Clyde Hutchinson, whom guided and inspired him along the way. He continued his education at Harvard University, where he landed a summer job in the astronomy department, as a radio astronomer, which eventually grew into a career; he attributes much of his success at this stage to his professor and thesis adviser, Edward Lilley, as well. He obtained a Master of Science and a Doctor of Philosophy from Harvard in 1965 and 1968, respectively, and then his real work began.

Upon reflection of his career, Dr. Palmer has been particularly proud of seeing the successful work done in the field by former students of his. With his wife of more than 50 years, Joan, who passed away in 2018, he has been the proud parent of three and grandparent of five. In retirement, he enjoys reading and staying connected to the scientific world. 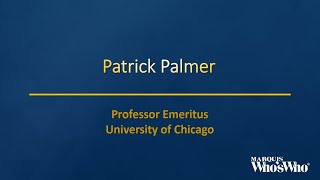