Mr. Humphreville was honored by the Danbury Symphony Orchestra with the rank of Conductor Emeritus in 2001

DANBURY, CT, August 04, 2021 /24-7PressRelease/ -- James E. Humphreville, BMus, MA has been included in Marquis Who's Who. As in all Marquis Who's Who biographical volumes, individuals profiled are selected on the basis of current reference value. Factors such as position, noteworthy accomplishments, visibility, and prominence in a field are all taken into account during the selection process.

James E. Humphreville's accomplished, four decades-long career as a music educator and conductor in the state of Connecticut all began when he was eight years old and handed a French horn. His older brother at the time was playing trumpet in the school band and his father bought the instrument on the condition that both his sons would play it—but it was young James who proved to have the natural affinity for it. Raised in a house full of music—his father played instruments and his mother sung and played piano—Mr. Humphreville honed his skills throughout middle and high school, so much so that by the time he graduated, he had attained a full music scholarship to attend Ohio Wesleyan University.

Playing all throughout college, Mr. Humphreville graduated with a Bachelor of Music in 1952, at which point he enlisted in the U.S. Army for three years, during which time he continued to play in the Fifth Army Band and studied under Philip Farkas, the principal French horn player with the Chicago Symphony Orchestra. Following his time in the military, he became a certified music teacher in Connecticut in 1957 and subsequently launched his career at Danbury High School, where he also excelled as the choir director from 1961 to 1975 and the conductor of the Danbury Concert Chorus from 1967 to 1985—both roles standing as his career highlights. In the midst of these appointments, he also earned a Master of Arts from Columbia University and became a member of the music faculty at Western Connecticut State University for 10 years. He was then promoted to the role of music supervisor all throughout Danbury Public Schools from 1975 to 1990 and lent his expertise to the Connecticut Opera Alliance as its conductor from 1994 to 1997. Mr. Humphreville served as the music director and conductor for the Danbury Symphony Orchestra from 1977 to 2000, after which he was honored with the rank of Conductor Emeritus in 2001 in the wake of his official retirement.

Outside of his primary endeavors in his field, Mr. Humphreville was also active on the Music Education Advisory Committee for the Connecticut State Board of Education from 1973 to 1976 and within the board of directors for the Danbury Concert Association from 1967 to 1980. Throughout his career, he remained connected to music in myriad ways, in such positions as the president of the Connecticut Music Educator Association and a member of the East Division Board of the Music Educator National Conference from 1971 to 1973. He also served as the vice president of the Danbury Musicians Association from 1991 to 1997, and has maintained affiliations with the American Federation of Musicians, the Masons, and Lions Club International in retirement.

Along with his late wife of more than 50 years, Ada May, who passed away in 2007, Mr. Humphreville has been the proud parents of two and a grandfather of one. In retirement, he spends his time between homes in Connecticut and Florida, writing diaries in German and being with his family. 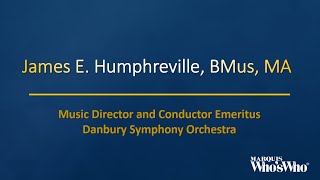