Gary L. Drivstuen Honored for his Success as an Entrepreneur

Mr. Drivstuen's drive for entrepreneurship led to the creation of Hide-A-Hose Inc.

MUKILTEO, WA, August 04, 2021 /24-7PressRelease/ -- Gary L. Drivstuen has been included in Marquis Who's Who. As in all Marquis Who's Who biographical volumes, individuals profiled are selected on the basis of current reference value. Factors such as position, noteworthy accomplishments, visibility, and prominence in a field are all taken into account during the selection process.

Equipped with a lifelong "go-for-it" attitude, a strong vision, a belief in his ideas, a drive to follow through with them, and plenty of resiliency, Gary L. Drivstuen has made a name for himself as an innovative, people-first businessman over the course of nearly six decades.

Raised in Monroe, Washington, where he has launched all his successful business ventures, Mr. Drivstuen has worked hard and steadily since graduating from high school—at which point he began making home deliveries from his family's dairy farm and processing plant. When the delivery business started to dwindle, he decided to build four red barns, from which he could sell his milk at a discount. He realized that drivers who stopped to pump their gas also often bought milk, and so he decided to consolidate the two services by attaching two gas pumps to the barns—which effectively boosted his clientele, which came in waves beginning in 1958 and persisting all the way through the 1980s.

With more than 20 years of entrepreneurship to his name, Mr. Drivstuen would stumble upon his biggest success, quite literally, in the mid- to late-1990s. While at home one day, he nearly tripped over the hose from the family's central vacuum system, which involved packing, carrying, and storing a hose from inlet to inlet, up and down the stairs, and then stashing away in a closet once vacuuming was completed. While enjoying the system itself, he and his wife, Sharon, found packing the hose after each vacuum job to be extremely cumbersome. Earlier that day, he had watched the deposit container zip into the bank while he was at the drive-thru bank teller, and suddenly, he conjured up an idea to utilize the suction from the central vacuum system to pull back a hose into the central vacuum pipe—"just like the pneumatic tube pulls in the deposit container at the bank," he thought. The hose would then remain in the wall without the need for any additional storage, and, because the hose is able to extend to a large size, its usage drastically reduces the amount of inlets needed.

In the midst of processing his patent, Mr. Drivstuen reached out and communicated with hose manufacturers, and even created a video of himself using his product to demonstrate its convenience and ease. While many of them showed no interest, he finally met the president of a hose manufacturing company who loved what he saw; upon getting the patent, other companies were suddenly very interested in meeting with him.

Prior to his retirement, Mr. Drivstuen earned very well-deserved acclaim as the operator and owner of Hide-A-Hose, Inc., a now-premier central vacuum system whose retractable hoses eliminate the inconveniences of lugging around and storing "long bulky hoses" from inlet to inlet. Between its launch and today, he and his son, Rod, have dedicated a great deal of time and energy into building connections with vendors and investors, and their long entrepreneurial journey has truly paid off in the form of fruitful business relationships with distributors, and a headquarters (formerly their basement) that is an impressive 12,000-square-foot facility in Monroe. Upon his retirement, Mr. Drivstuen passed the business down to Rod and his wife, Debbie, who are co-owners of Hide-A-Hose.

In addition, Mr. Drivstuen and Hide-A-Hose have been highlighted as the Editor's Choice for Green Builder's "Hot 50 Products List," which honors innovative products "that pave the way toward a more sustainable future." Upon reflection of his accomplishments, he attributes his success partly to taking a chance on realizing his vision and stepping out of his comfort zone in order to do so. He hopes to be remembered by those around him as someone who was honest, happy, and loved people. Now retired, Mr. Drivstuen plans to enjoy spending his winters in Arizona and practicing golf, as his goal is to become just as good a golfer as his wife, Sharon. Married for 62 years, together they have three children, 12 grandchildren, and 13 great-grandchildren. 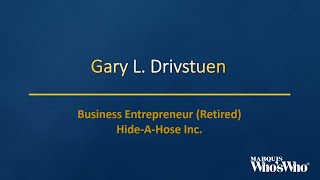