Kiyoshi Hamada Gets the Star Treatment!

HAMBURG, NJ, August 27, 2021 /24-7PressRelease/ -- Kiyoshi Hamada has participated in The Star Treatment, a prestigious video series hosted by renowned lawyer and television personality, Star Jones. This premier video series is extremely limited — Marquis Who's Who qualifies 500 listees on an annual basis for this elite service. Backed by a storied career in media that spans more than two decades, Star works closely with Marquis listees to assist with networking goals and commemorative efforts that can be shared with a worldwide audience.

Backed by a strong work ethic and an innovative spirit, Mr. Hamada spent nearly 40 years at Toshiba Corporation prior to his retirement in 1998, greatly contributing to its growth both in Tokyo, Japan, and the United States and helping to build it into the leading company it is today. A pioneer with a vision for the future, he was integral in introducing, developing, and updating the company's computer systems, which gave way to Toshiba's expansion into five subsidiaries. For the last 13 years of his career, he excelled as the vice president of information systems for Toshiba America Consumer Products, Inc., based in Wayne, New Jersey, a role in which he actively coordinated communications, and handled data exchanges, among the other branches and manufacturing plants of the international company through networks and computers.

Born and raised in Japan, Mr. Hamada prepared for his industrious career by earning a Bachelor of Arts in economics from Keio University in Tokyo in 1957. He subsequently gravitated toward Toshiba, the renowned juggernaut of the electric and electronic industry, with the original intention of utilizing his expertise in economics there. However, the company assigned him to the Lamp Stamp and Tube Division, which is where he first worked from 1957 to 1960. He then transitioned to the Staff Overseas Operations of the company for two years before being assigned, along with a colleague, to open the first office in the United States, in New York City—from which he served as a liaison for the company from 1962 to 1965.

Though he would quickly find his footing in his new environment, Mr. Hamada arrived there with no substantial knowledge of the inner workings of America. "I didn't even know Manhattan was an island," he recalled, with a laugh. He ended up enjoying the work he was doing so much that a month after returning to Japan from the overseas assignment, he made the decision to leave again and was made manager of Toshiba America, Inc. in New York, where he remained from 1968 to 1985, serving as the director of electronic data processing for 15 of those years. During his time in New York, he focused his energy on dominating the competition through marketing and the management of the computer systems—as he was not interested in taking responsibility of other executive positions. In his unique position there, among numerous responsibilities, he coordinated the frequent replacement of hardware software to support a business administration and operation tool. Through his roles at Toshiba, Mr. Hamada also found it extremely rewarding to meet many professionals outside of the company, such as professors and government personnel, through seminars, conferences, and meetings he often attended as an employee.

In retirement, Mr. Hamada, who became a United States citizen in 1996, established himself as a valued member of his New Jersey community, serving as a trustee of the Sussex County Historical Society for five years. In this capacity, he helmed the research-heavy project of creating the Sussex County Historic Sites map, a comprehensive outline and historic description of 24 municipalities; in order to complete this task, he worked alongside local historians, corresponded with a printing company. He has also utilized his writing skills to author and publish his life's story in the book, "K.H. in Seven Decades." The book and map were registered in the Library of Congress. Now he is an active member of Vernon Township Rotary Club. Mr. Hamada had remained connected to his industry and beyond through his memberships with numerous organizations, such as the Japan-U.S. Communications Association, Alumnus of the Institution for Information Studies at the Aspen Institute, American Management Association, Association of Information Technology Professionals and a fellow with the Society for Information Management and Data Processing Management Association until his retirement.

Speaking to the future generation of professionals, Mr. Hamada advised, "If you're assigned to do a job, of course do your best…but also if you have an idea that is beneficial to the company, don't hesitate to approach management." An accomplished and innovative leader with a commitment to success, Mr. Hamada is certainly deserving of the 'Star Treatment.' 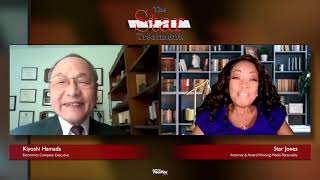