Ms. Mayo is currently working on an artistic performance, named for her parents

SACRAMENTO, CA, August 27, 2021 /24-7PressRelease/ -- Anna Yeung Mayo has participated in The Star Treatment, a prestigious video series hosted by renowned lawyer and television personality, Star Jones. This premier video series is extremely limited — Marquis Who's Who qualifies 500 listees on an annual basis for this elite service. Backed by a storied career in media that spans more than two decades, Star works closely with Marquis listees to assist with networking goals and commemorative efforts that can be shared with a worldwide audience.

As a person who has devoted herself to helping others, Ms. Mayo has spent many years promoting Asian arts and culture in the United States. The founder and organizer of the Finest Asian Music Festival since 1988, Ms. Mayo developed an early love of Asian culture. In 1984, she took a special Eastern tour with her mother and found herself deeply admiring the architecture and art she saw, not to mention the people. She took up classical dancing to deepen her knowledge, and she volunteered as a videographer for artists in San Francisco, including the famed cellist, Yo-Yo Ma. She earned a master's degree in Asian arts studies and philosophy, and she is presently pursuing a doctorate in counseling, which she intends to use by helping the homeless and underserved. As a beneficiary of counseling for the past 20 years, Ms. Mayo knows well the value that a caring professional can have on those in need.

A self-described true artist by heart, Ms. Mayo tries to find art in everything that she does. From designing websites to writing music, she always puts the extra effort into her work to make sure that it is representative of who she is and what she loves about the world. She has spent a large part of her career in service to the Department of Defense, working on various Air Force bases, but she never lost sight of her passion for the performing arts. Her most recent position with the Department of Defense, a member of the logistics department at McClellan Air Force Base, led to her being selected as the key decoration coordinator in charge of the base's final Transfer of Function Event, consisting of over 5,000 employees. She has also received the Mather Air Force Hospital picture plaque award for designing and organizing their new medical library. Of course, when her country required her service, Ms. Mayo did not shy from her duty. She was called by the Air Force to participate in Operation Desert Shield for nearly a year, and she proudly answered the call.

Ms. Mayo is currently busy on an artistic performance that she is organizing, loosely based on Snow White, as that is a portmanteau of her parent's Chinese first names: her mother's name, which translates to "Snow Eagle," and her father's, which is "One White." Ms. Mayo chose this name to honor the support she received from her parents in pursuing her passion for performing arts, and she hopes that it is a gift that she will be able to pass on to others. "I also hope this video will inspire many to treasure and give respect to other cultures in this world," said Ms. Mayo. With a creative mind and a talent for exploring cultural arts, there is no doubt that Ms. Mayo is a worthy recipient of the Star Treatment. 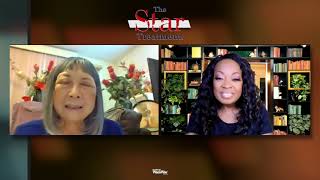