Notably, Dr. Syed practices under the credo, "the patient is always right"

Rabahuddin Syed, MD has excelled in the medical field for most of the last decade—as a general physician, a clinician, a researcher, an educator, and a contributor to medical journals.

ATLANTA, GA, September 08, 2021 /24-7PressRelease/ -- Rabahuddin Syed, MD has been included in Marquis Who's Who. As in all Marquis Who's Who biographical volumes, individuals profiled are selected on the basis of current reference value. Factors such as position, noteworthy accomplishments, visibility, and prominence in a field are all taken into account during the selection process.

Driven by hard work, a laser focus on the job at hand, and a love for bettering the health of others, Rabahuddin Syed, MD has excelled in the medical field for most of the last decade—as a general physician, a clinician, a researcher, an educator, and a contributor to medical journals. Over the course of his accomplished career so far, Dr. Syed has concentrated his practice on internal medicine, regenerative medicine, all areas of men's health, and telemedicine, with such daily responsibilities as performing physical exams and cosmetic procedures—including liposuction—providing testosterone replacement therapy, giving oversight to advanced practitioners, and reviewing charts, among other duties.

Dr. Syed's future was mapped out early on — born in Houston, Texas and brought up in rural Georgia in a strict family that emigrated from India, he was often encouraged to pursue a career in medicine as it was a stable and sustaining one. While he initially had athletic aspirations, he eventually saw how rewarding and viable a doctor role would be and so he shifted his energy toward a strong education—which he approached with the ferocity of a sport. Upon graduating from high school, he attended Georgia State University and earned a Bachelor of Science in biology in 2009, followed by years of coursework at Ross University School of Medicine, where he launched his professional life as a teaching assistant in the anatomy department and a peer tutor from 2011 to 2012. He ultimately obtained a Doctor of Medicine from the institution in 2015, after which he began a residency in internal medicine at Memorial University Medical Center and landed a research position at the CDC.

Just in the past few years, Dr. Syed has juggled numerous positions—serving as a hospitalist at Piedmont Healthcare since 2018, a general physician at Priority Men's Health from 2019 to 2020, and, since 2020, a general physician at TembiHealth, Maxim Healthcare Services, Inc., and Veterans Evaluation Services. Additionally, he previously lent his expertise as a medical doctor at Bubolo Medical LLC. He continues to work with Nationwide Health Advocates and recently began with Sheffrin Men's Health. Outside of his primary posts, he is also active as a master clinician for a Continued Medical Education Program and HealtcareTeleMed, a doctor for TeleVisitMD, and a physician for Vireohealth, a physician-founded, patient-focused company dedicated to providing best-in-class medical cannabis-based products. Despite his myriad jobs, he has always managed to treat every patient with compassion, care, and undivided attention; in fact, he noted that he hopes to be remembered for giving his full attention to his patients, saying that "The patient is always right." For even longer than he's been dedicated to medicine, Dr. Syed has been passionate about volunteering and serving others who need help, which he started doing in his sophomore year at Spalding High School; he has since volunteered for numerous organizations, such as Hands On Atlanta, Open Hand Atlanta, MedShare, Trees Atlanta, as well as for the local community by delivering food to those who can't easily leave the house.

Dr. Syed has also found success with the written word, having contributed articles to several professional publications, such as the Journal of the American Medical Association, New England Journal of Medicine, NEJM Catalyst Innovations in Care Delivery, and the CDC's Morbidity and Mortality Weekly Report. He has also remained connected to the industry as a devoted member of the American Urological Association, Society of Critical Care Medicine, American Board of Quality Assurance and Utilization Review Physicians, American College of Physicians, American College of Physicians, Massachusetts Medical Society, and International Society for Sexual Medicine. Though still young in his career, he has accrued lots of wisdom and experience to pass down to future generations of health care professionals; stressing the amount of work that goes into the career, he advised, "If you go into medicine, do it because you want to do it…you have to want to do it. Don't go in with one foot in and one foot out because you will only be miserable."

Looking toward the future, Dr. Syed plans to continue to build on his productivity in the medical world. When he isn't tending to the needs of his patients, he keeps active with road racing, attending track and field events, reading, and spending time with his puppy. 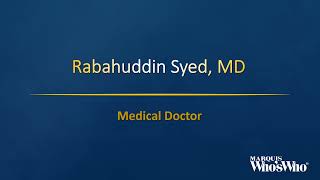