RED BANK, NJ, September 08, 2021 /24-7PressRelease/ -- Michele Konopko Lawsonhas been included in Marquis Who's Who. As in all Marquis Who's Who biographical volumes, individuals profiled are selected on the basis of current reference value. Factors such as position, noteworthy accomplishments, visibility, and prominence in a field are all taken into account during the selection process.

Michele Konopko Lawson started working in a hair salon as a child. Driven by her natural artistic abilities and a love for the positive and welcoming environment of the salon, she knew from a young age what she would be doing for the rest of her life. However, she couldn't have known then just how much of a difference she would one day make.

Ms. Lawson serves as the owner and stylist at Hair & Company in Red Bank, New Jersey, and the founder and president of Wig Warriors-The Maureen S. Konopko Foundation, which provides numerous cosmetic services to those going through cancer treatments. On top of her extraordinary work and business accomplishments, she has strived to make the world a better place with kindness, a friendly attitude, an ability to listen, and a desire to connect with people. When it comes to her clients and community, Ms. Lawson has been a cut above the rest.

A lifelong New Jersey native, Ms. Lawson spent most of her childhood in a salon owned by a family friend, whose regular clients included her stepmother, Maureen, and aunts. She gravitated toward the field almost immediately as she was always talented with hair and makeup, and saw the business as a place where people went to smile and feel better about themselves. After completing coursework in cosmetology at Morris County Vocational School, she began her journey toward a career as a stylist under the guidance of Joanne Wiener, who owned two salons, one of which was Hair & Company, where Ms. Lawson began working at 22 years old in 1989. As she was raised in a blue collar area in a family that worked hard for every cent they had, she was motivated by Joanne, a self-made person with a similar background succeeding at what she loved; Joan educated her, helped her cultivate her skills, and treated her like a daughter for more than 25 years before deciding to hand over the salon keys to her successor.

In 2016, Ms. Lawson inherited Hair & Company and has since excelled in maintaining the business's long-running success as a beacon in the local community, providing top-notch customer care, upscale services, and a comfortable, inviting atmosphere by way of a gifted staff of stylists. At Hair & Company, she and her team has strived to "make every day, your best hair day." In addition to running the salon, she, with the help of family and staff members, opened Wig Warriors-The Maureen S. Konopko Foundation in 2018, which is named in honor of her stepmother, who was diagnosed with cancer in 2000 and lost her battle with it in 2006. Since her stepmother's diagnosis, Ms. Lawson has been volunteering with cancer patients, and has long been a contributor to the American Cancer Society, through which she taught a makeup class called the 'Look Good, Feel Better' program and served as a wig coordinator between 2001 and 2019. In an interview with Colella Communications, Ms. Lawson said, "The foundation I've established, based on my last 19 years working with cancer patients, was created not only to honor my mom's memory, but also because, through these years, I have realized there is such a great need for patients to have a place to go and someone to turn to that will deal with the cosmetic side effects from this terrible disease." Through Wig Warriors, she builds the confidence of women by providing free-of-charge services, including wig stylings and fittings, head wraps and coverings, haircuts and shavings, shampooing, upkeep, and makeup classes for eyebrows and eyelashes. Ms. Lawson also looks forward to the grand opening of a wellness center she has built with her twin sister called Hello Sunshine Center for Self-Care, which opens its doors in August 2021.

In addition to her primary endeavors, Ms. Lawson has given back as a haircutter for HABcore, which provides permanent housing and individualized support for homeless families, veterans, and those with special needs, since 2016—for which she was recognized with an honor. She also received a Feel Better Sunrise Award from the American Cancer Society in 2019. Upon reflection of her accomplishments, she has attributed her success to staying true to herself, sticking to her passion, the influence of her mentor, Joanne, who has greatly contributed to her stability in a transient industry, and raising three sons, all of whom she's incredibly proud. Looking toward the future, Ms. Lawson hopes to expand the scope of her business and see her other ventures grow.

Speaking to the next generation of professionals, she said, "Use your craft to do good…give back to the community, give back to those in need." 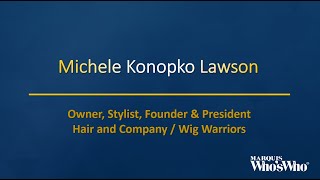