Mr. Schultz has worked as a committee member for the Civil Legal Advice and Resource Office (CLARO)

He hopes to one day be considered one of the top appellate attorneys in the state and remembered by clients as a trustworthy attorney who handled their cases properly and effectively.

PORT WASHINGTON, NY, September 15, 2021 /24-7PressRelease/ -- Michael D. Schultz, Esq. has been included in Marquis Who's Who. As in all Marquis Who's Who biographical volumes, individuals profiled are selected on the basis of current reference value. Factors such as position, noteworthy accomplishments, visibility, and prominence in a field are all taken into account during the selection process.

Motivated by his abilities to help others on a daily basis, Michael D. Schultz, Esq. has garnered a reputation as a people-driven, impassioned, and highly-successful figure in the legal field. With a particular expertise in the areas of personal injury law and appellate practice, Mr. Schultz has been serving the public as an associate attorney at Davis & Ferber LLP, a New York-based firm, since 2019.

Growing up in Port Washington on Long Island, Mr. Schultz gravitated toward his profession at a young age. Throughout his middle school years, whenever he was sick and stayed home, he would be captivated by hours of legal shows on TV, fascinated by all the cases and proceedings. By the time he was in high school, he was able to take legal courses—centering on criminal law and business law—and became so fascinated by the work that he often furthered his studies outside of the class curriculum. It didn't take long before he decided that he wanted to devote his life to the practice of law. Mr. Schultz chose to concentrate on personal injury matters primarily, as he wanted to be able to develop positive relationships with people through his services.

While studying at Wagner College in 2011, Mr. Schultz gained firsthand experience as an intern at the Kings County District Attorney's Office in Brooklyn, and graduated magna cum laude with a Bachelor of Science in business administration the following year. He continued as a summer legal intern at the office, as well as at the Nassau County District Attorney's Office, between 2013 and 2014 before obtaining a Doctor of Jurisprudence from St. John's University School of Law in 2015. He launched his career as an associate attorney at Dell & Dean, PLLC, a personal injury firm that strives to treat its clients as family—a fitting environment for his earliest professional aspirations. Excelling in his role from 2015 to 2019, he was mentored at the firm by an older attorney, Joseph Muzio, who was integral in guiding his career and development. Upon leaving Dell & Dean, Mr. Schultz transferred his position and skillsets to Davis & Ferber, which offers its services to the five boroughs of New York, as well as Nassau County, Suffolk County and both Westchester and Rockland Counties.

Speaking on his work, he said, "I have helped a lot of people have their day in court and get compensated for injuries and damages that weren't their fault…every case is important to [me] because it helps someone." In addition, he has been especially proud of his work in appellate courts, with a notable achievement being the first decision he reached in the appellate division, which helped distinguish medical malpractice from medical negligence.

Outside of his primary endeavors, Mr. Schultz has volunteered and worked as a committee member for the Civil Legal Advice and Resource Office, or CLARO, an organization that provides legal advice to low-income New Yorkers being sued by debt collectors. Moreover, he is connected to his field as a devoted member of the New York State Bar Association and New York State Trial Lawyers Association. Looking toward the future, he hopes to one day be considered one of the top appellate attorneys in the state and remembered by clients as a trustworthy attorney who handled their cases properly and effectively. Mr. Schultz advised that future generations of attorneys consider that "your clients are counting on you to help them, and that is what keeps them motivated. If it keeps you motivated, you will do fine and be successful." 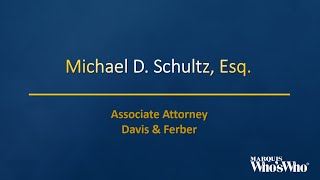