A distinguished educator Ms. Colbert also excelled during a 30-year tenure with the United Nations

NEW YORK, NY, September 15, 2021 /24-7PressRelease/ -- Nancy Jeanne Colbert has been included in Marquis Who's Who. As in all Marquis Who's Who biographical volumes, individuals profiled are selected on the basis of current reference value. Factors such as position, noteworthy accomplishments, visibility, and prominence in a field are all taken into account during the selection process.

In an accomplished career that has spanned more than five decades, Nancy Jeanne Colbert has dedicated herself to the art of language and educating others across several venues, from public schools and colleges to government organizations. Since 2016, she has brought her years of accrued knowledge and hands-on experience to private homes as a tutor of several subjects.

Born in Italy, immigrating to the United States soon after, and then completing her first year of high school in France, it's no wonder Ms. Colbert has always been interested in different languages. She attributes much of her success to the precedent set by her mother, Alberte Renée, a French instructor at Thayer Academy in Massachusetts who was also active in the March of Dimes and other charitable organizations. She deeply valued her mother's efforts throughout her upbringing and learned early on that, in her words, "success can be defined as happiness in contributing positively." While in high school, she was a finalist in the coveted American Legion Essay Contest and received the Modern Language Award. Not surprisingly, upon graduating, Ms. Colbert gravitated toward French as her major—she earned a certificate from the University of Tours in France in 1972 and El Instituto Cultural de Leon, formerly called Instituto Cultural IMLE, in Mexico in 1973, by which point she had already experienced work in education as an assistant to the art teacher at Smith College. She then obtained a Bachelor of Arts in French from Wheaton College in 1976 and launched her career as head clerk at the Office of Federal/State Resources in the Department for Developmental Disabilities for the Commonwealth of Massachusetts, during which she was mentored by a woman named Doris Fraser—a great role model to her who encouraged her to pursue teaching.

After two years in this appointment, Ms. Colbert taught French to first and second graders, as well as serving as a teaching assistant, within the Bilingual Education Program at Saint Patrick's School in New Hampshire. She then continued her own education at University of Dijon, now known as the University of Burgundy, in France, where she earned a certificate in 1979. Equipped with new expertise, she became a freelance translator, proofreader, typesetter, and typist for numerous agencies in New York before starting a 30-year role as an editorial assistant, verbatim reporter, and contributing editor for the United Nations in 1980. In the midst of her work with the UN, she balanced a job as a real estate salesperson for Florida and New York properties between 1985 and 1989.

When Ms. Colbert's father died in 1989, her mother stopped eating. Her sister could not handle the situation since she lived an hour away and had two small children. Her sister asked Ms. Colbert to come home to Massachusetts to live with her mother, which she did from 1989 to 1991. She became a communications management major at Simmons University in Boston, from which she graduated with a Master of Arts in 1990; while a student, Ms. Colbert was greatly inspired by a professor of hers, Lynda Beltz, who showed her just how effectively teachers could guide young people toward successful outcomes.

Always wearing numerous hats, Ms. Colbert was active as an assistant at the Anti-Defamation League in Boston from 1990 to 1991, a customer service representative for the Michael C. Fina company in New York from 1996 to 2000, a TESOL Instructor at The School at Columbia University from 2004 to 2006, a deputy fire warden for Two UN Plaza from 1995 to 2010, and an English and math tutor for K-12 students at Champion Learning Center from 2006 to 2012. While maintaining these positions, she earned certificates from Universidad Católica de Manizales in 2001, Columbia University in 2004, Sorbonne University in 2005, and Irkutsk State Technological University in Russia in 2011. She completed her education in 2015 when she earned a Master's in Education in Elementary Education from Grand Canyon University—after which she became a teaching assistant at Vito Marcantonio School, a substitute teacher throughout Manhattan, the Bronx, Queens and Brooklyn and a teacher of English as a Second Language at Rennert International. Later, she focused on tutoring services, and in July 2021, accepted a positing as assistant teacher at Bold Place for Hope in Brooklyn, working with young children. Upon reflection of her experience in an elementary setting, Ms. Colbert recalled handing certificates of appreciation out to her young students; she loved looking at their faces when they received the accolades and helping them feel that "everything was going to be OK and that they were the future."

In addition to her primary endeavors, Ms. Colbert has been an active member of the United Nations Symphony Orchestra as a violinist, the Smith College Freshman Choir, and the Dedham Youth Orchestra—as well as the Boston Scottish Fiddle Club and a reader to blind students at Boston College. She has also been a contributing editor to the UN Report and UN Secretariat News and has written an article for Simmons College Alumni Magazine. Over the course of her extensive career in the UN, she lent her services as secretary of the Coordination Board of the group, United Nations Women's Guild, and a treasurer of the UN Staff One Percent for Development Fund.

In her spare time, Ms. Colbert enjoys going skiing and playing the violin, chess, and bridge. 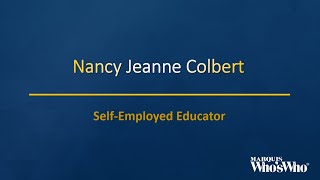