D.L. Jennings Gets the Star Treatment!

PITTSBURGH, PA, September 28, 2021 /24-7PressRelease/ -- D.L. Jennings has participated in The Star Treatment, a prestigious video series hosted by renowned lawyer and television personality, Star Jones. This premier video series is extremely limited — Marquis Who's Who qualifies 500 listees on an annual basis for this elite service. Backed by a storied career in media that spans more than two decades, Star works closely with Marquis listees to assist with networking goals and commemorative efforts that can be shared with a worldwide audience.

While in Africa, during his ninth deployment as an active duty airman in the Air Force, Mr. Jennings began writing a fantasy novel that not only served as an escape from daily pressures and bleakness—but would turn him into an award-winning author with a fulfilling, exciting, and long-in-the-making career. Growing up in a household of voracious readers, his parents—both Air Force veterans themselves—instilled in him an early love for literature; when he was seven, he recalled that his mother transported him to another world on a nightly basis when she read him "The Magician's Nephew" by C.S. Lewis, one of the enchanting entries in his "The Chronicles of Narnia" series. These books and its author left an immediate impact on him and launched a lifelong obsession with the fantasy genre. Speaking on Lewis and other literary heroes of his, such as J.R.R. Tolkien and Robert Jordan, he said, "It's not to say I can't enjoy the occasional thriller or nonfiction book, but there's something about fantasy and the magical worlds that these authors paint that's always spoken to me." But despite his love for reading and writing throughout his youth, Mr. Jennings never considered a career in crafting stories of his own. While pursuing a collegiate degree at Bellevue University, the September 11th attacks occurred, prompting his decision to follow in his parents' footsteps and enlist in the Air Force.

An airborne linguist from 2004 to 2018, Mr. Jennings excelled in the service, earning numerous accolades, such as a Korean Consult General Award, a Leadership Award, and a Joint Service Achievement Medal, and an induction as a Senior Non-Commissioned Officer. While deployed, he found refuge in his favorite authors, many of whom—such as Tolkien and Jordan—served in the military; in fact, he was inspired by the fact that Tolkien wrote seminal work while fighting in World War I and drew on his experiences to craft epic texts like "The Lord of the Rings" and "The Silmarillion." He naturally set his sights on the fantasy genre and began writing, often at night after a full day of missions. Though he admitted that there were some days he couldn't write due to the heavy emotional toll he felt, there were more days he felt he simply had to write. Drawing on what he was seeing day in and day out, he was able to create fantastical versions of real-world landscapes in his work, from "the frozen tundra of the North" to "the burning sands of the South." As he progressed, he sent passages from his story to a pen pal friend of his, who worked in the publishing industry, who encouraged him to complete and publish it. In 2018, while still deployed and navigating missions in areas like Iraq and Afghanistan, Mr. Jennings published and released "Gift of the Shaper: Book One of the Highglade Series," a sprawling and unexpected tale of heroes, magic, and gods, mythology building, and characters drawn from his own life and experiences. "I was focusing a lot on telling the story of how these normal kinds of people can blossom into something that's beyond normal," he said of the book. "I like to see people become something greater than the sum of their parts."

Commercially successful and critically-acclaimed, "Gift of the Shaper" earned a Beverly Hills Book Award for Best Fantasy and catapulted Mr. Jennings to literary success. In 2020, he released the second installment of his fantasy series, "Awaken the Three," which won the Best Indie Book Award for Epic Fantasy, a Next Generation Indie Book Award, and an NYC Big Book Award. He is currently writing the third and final book in the "Highglade" saga, titled "Days of the Dark," and plans to continue pursuing his passion—penning screenplays and exploring new book ideas. As much as he loves doing the work itself, he has found it most rewarding that his books have resonated with people—especially those who don't generally read fantasy. On his extremely personable website, he connects with his readers through a newsletter, a blog, and offers signed and personalized copies of his two novels. In addition to his primary projects, he wrote a piece on his military experience for a website and collaborated with his father, a bestselling author of business books, on his most recent published work, "House on Fire! A Story of Loss, Love & Servant Leadership."

Upon reflection of his life and career so far, Mr. Jennings—as he does in his stories—hopes that people will see him as greater than just the sum of his parts: not just a military veteran or a writer, but someone who strived to leave the world a better place than he found it. Aiming to leave a lasting impression through his written work as well, he takes great pride in the accolades and merits he's received for his books and the ability to help others find escape when they need to. "I'm absolutely passionate about writing I'm so thrilled that I'm able to do this…This is something I've worked toward for going on 40 years now." 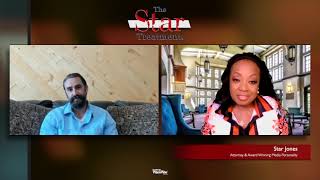