VIENNA, VA, September 30, 2021 /24-7PressRelease/ -- Paul J. Newman MD, MBA, MS has been included in Marquis Who's Who. As in all Marquis Who's Who biographical volumes, individuals profiled are selected on the basis of current reference value. Factors such as position, noteworthy accomplishments, visibility, and prominence in a field are all taken into account during the selection process.

For more than 20 years, Paul J. Newman MD, MBA, MS has established himself as a hardworking figure in and around the medical profession, which he has navigated with great persistence. Since 2019, he has excelled as a faculty physician within the Department of Family Medicine at the University of Maryland Capital Region Health Prince George's Hospital Center. In this role, he provides inpatient medical service, rehabilitation, long-term acute care, and palliative medicine service—all while treating his patients and their families with compassion and respect.

Born and raised in Chesapeake, Virginia, Dr. Newman gravitated toward his eventual profession from a young age, as his father was a practicing obstetrician-gynecologist. Upon graduating from high school, he earned a Bachelor of Science in biology and finance from the Virginia Polytechnic Institute and State University in 1999, and subsequently attended Marymount University, where he obtained a Master of Science and a Master of Business Administration between 2007 and 2010. Equipped with several degrees and academic prowess, he completed his studies with a Doctor of Medicine from the Ross University School of Medicine in 2016.

In the midst of his education, Dr. Newman accrued experience in the field as a paramedic for numerous ambulance companies in the Roanoke region between 2000 and 2004, during which he performed inter-hospital transports on critical care adult, pediatric, and neonatal patients; it was this job, as well as the numerous mentors he has had over the years, that continually motivated him toward the medical field. Following this appointment, he became a finance instructor at the National College of Business & Technology, focusing his teachings on analysis and valuation of equity securities, economic indicators, and financial statements. He found success as a medical underwriter at WellPoint from 2004 to 2006, a budget analyst for GEICO from 2006 to 2008, and a research manager at United BioSource Corporation from 2010 to 2011. Prior to becoming a physician there, Dr. Newman completed an internship and residency in family medicine at the University of Maryland Capital Regional Health Prince George's Hospital.

Guided by a passion for making people healthy, easing the suffering of others, and accomplishing it in a collaborative way with all of his team members, Dr. Newman has also earned a hospice and palliative fellowship at George Washington University, for which he obtained experience at the Veterans Affairs Washington D.C. and Children's National Medical Center. In fact, he hopes to focus his time and energy on palliative care for the local community in the coming years. Additionally, he has been affiliated with the American Medical Association and American Academy of Family Physicians.

Upon reflection of his achievements thus far, Dr. Newman has been most proud of fulfilling his dream of becoming a doctor, as well as the impact he made in his earlier years as a paramedic. Feeling honored to serve and treat his patients, he hopes that those aspiring to pursue the medical field "continue to think big ideas, try to improve medicine, and continue to persevere," as he has done. Dr. Newman is happily married to his wife, Gloria, and the proud father of two. 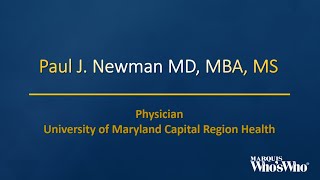