Trish Leonard is Celebrated for Her Career in Marketing

Ms. Leonard was honored as Woman of the Year by the Zonta Club of Bonita Springs-Estero in 2011

BONITA SPRINGS, FL, October 07, 2021 /24-7PressRelease/ -- Trish Leonard has been included in Marquis Who's Who. As in all Marquis Who's Who biographical volumes, individuals profiled are selected on the basis of current reference value. Factors such as position, noteworthy accomplishments, visibility, and prominence in a field are all taken into account during the selection process.

Motivated by a desire to help others and push through any obstacle standing in the way of success, Trish Leonard has established herself a compassionate, optimistic, and inspiring businesswoman in her beloved community of Bonita Springs, Florida. Through Trish Leonard & Co., also known as TLC, she and her team provide innovative marketing, public relations, and event planning services in order for their clients—small and local businesses—to grow and prosper, while also upholding social responsibility within the community. Given its kind and positive approach, TLC delivers on its acronym by bringing "tender loving care" to all since its founding in 2009.

According to Ms. Leonard, "We want to get to know our clients in ways that establish accountabilities on both sides of our spectrum of care…often it leads to a long-term relationship, the most rewarding of all. Who doesn't need a little TLC?"

Originally from Queens, New York, Ms. Leonard grew up with 15 siblings; her father was a demolition contractor in the city, from whom she learned a lot, and her mother was a baker. She attended college and received a certificate and degree in hamburgerology from McDonald's Corporation Hamburger University in 1981. She then launched her career in Florida as a marketing and sales director at Adams & O'Reilly, Inc., which did business as McDonald's, from 1983 to 1996. Following this appointment, she found success as a membership director for Bonita Springs Area Chamber of Commerce from 1998 to 2008. Always a bright, friendly, and people-oriented individual—traits that helped her excel in her previous post—she came into her own within the Chamber of Commerce, where she got a firsthand glimpse at the struggles that owners of small businesses faced. She was inspired by people around her, and she found great joy in socializing and networking in her community. Her time there was, as she put it, "a really big push to getting me on track to where I wanted to be." In addition to the chamber, Ms. Leonard served as the director of business development at the Odle McGuire Shook Corporation from 2006 to 2008.

Toward the end of the 2000s, however, the global financial crisis hit and crashed the market. In the wake of this shattering moment, Ms. Leonard, though, "refused to be a loser" and took the opportunity to reinvent herself. Additionally inspired by the ability to lend a hand to others in distress, she decided to utilize her cumulated expertise in public relations, marketing, and event planning to start her own business, Trish Leonard & Co.—one that promotes fledgling startups; "identifies key demographics strategic to the success of a promo"; and puts together an event that reflects the personal and professional preferences of the client. Considering all that they do, it didn't take long for the efforts of Ms. Leonard and her assembled staff at TLC to garner recognition. Since its founding, the energetic leader has been honored as Woman of the Year by the Zonta Club of Bonita Springs-Estero in 2011 and Citizen of the Year by the USA Today Network and Naples Daily News in 2016. Another great highlight for her was when the Welcome Center at the Everglades Wonder Gardens was renamed the Trish Leonard Welcome Center due to her philanthropic efforts and achievements. The company itself was awarded Small Business of the Year by the Estero Chamber of Commerce in 2015 and Bonita Springs Area Chamber of Commerce in 2018, and included in the Business Hall of Fame as "Best of Bonita Springs" by the Bonita Springs Award Program in 2020 and 2021.

Outside of her primary endeavors with the company, Ms. Leonard was also involved with the Southwest Florida Speakers Assembly from 2009 to 2013 and found success as the director of marketing and attitude at the Small Business Development Center at Florida Gulf Coast University from 2009 to 2014. Additionally, she has been active as president of the Zonta Club of Bonita Springs-Estero since 2017, and previously held high-ranking positions within the Bonita Springs Downtown Alliance, Bonita Springs History Society Festival of Trees, Bonita Springs Short Film Festival, and Everglades Wonder Gardens. Although she pursued a career without a formal degree, Ms. Leonard has never stopped learning and building her expertise over the course of the last two decades; she completed coursework in leadership at the Bonita Chamber of Commerce in 2002 and 2004, earned certificates from the U.S. Chamber Institute of Organizational Management in 2002, the U.S. Chamber of Commerce in 2005, and the Kauffman FastTrac.

Upon reflection of her career, Ms. Leonard hopes that she leaves behind a legacy as a genuine, approachable, and people-minded business leader with a strong work ethic who truly cared about her community. Grateful for her husband, two sons, and three grandchildren, she looks forward to a future spent with them—as well as continuing to work and stay on her current path. Speaking to those of the future generations, especially aspiring to succeed in business, Ms. Leonard says, "Believe in yourself, know that you're human and you will make mistakes…but don't dwell on them. I have a firm belief in the ability and power of women [of all ages and cultures] to achieve. I think it's important that we stick together." 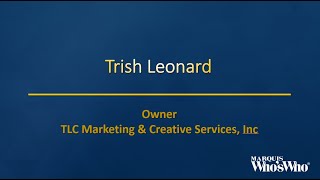