Stelios J. Koutouvides Honored as an Artist and Restaurateur

Mr. Koutouvides excels as the owner of Max Pizza and Stels Art Gallery

Mr. Koutouvides welcomes his clientele with the phrase, "When you're at Max, you're family."

BRISTOL, CT, October 07, 2021 /24-7PressRelease/ -- Stelios J. Koutouvides has been included in Marquis Who's Who. As in all Marquis Who's Who biographical volumes, individuals profiled are selected on the basis of current reference value. Factors such as position, noteworthy accomplishments, visibility, and prominence in a field are all taken into account during the selection process.

Driven, committed, and passionate about his work, Stelios J. Koutouvides has utilized his artistry—both in crafting pizza in his restaurants and creating rich landscapes and portraits in his paintings—throughout his unique and rewarding career that's been built on providing excellent products for people.

Growing up in Arusha, Tanzania, Mr. Koutouvides developed his affinity for painting at 13 years old, at which point he began contributing work to a festival at his school. Gifted in nature-based art, from landscapes of Africa to animals, he sold his first painting—a scene of a lioness killing a kudu—when he was 16. A few years later, he relocated to the United States and resided in Bristol, Connecticut, where he entered into several art shows and took home numerous accolades. Though his inner artist never left him, he switched gears when it came time to pursuing a higher education and ultimately earned a Bachelor of Science in mechanical engineering from Hartford University in 1971. He then got a job in his field at Superior Electric in the city of Bristol, which made and sold motors, motion-control devices, voltage controls, and adjustable speed drives, among other products. His employment there didn't last too long, however, as he was laid off and left looking for a new mechanical engineering position.

During this time, his wife, Niki, whom he married in July 1973, was working at a restaurant. Frustrated over a lot of job prospects in the area, he and Niki made the decision to open up a pizzeria next to their house; in 1976, Max Pizza was established, serving up fresh pizza, pasta, and full dinners at fair prices. Beginning with one location, it has since blossomed into a four-restaurant chain throughout Connecticut that has been recognized for "Best Pizza" by several local newspapers. Attributing the restaurants' success to their loyal customers from the community and beyond, as well as the environment he has created within it, Mr. Koutouvides welcomes his clientele with the phrase, "When you're at Max, you're family." In addition to the business, he has returned to his earliest passion with the opening of Stels Art Gallery, where he showcases and sells his prolific collection of original paintings—including landscapes of Africa and New England, sea sides, and waterfalls, lighthouses, portraits of people and pets, and everyday life experiences, many of which have lined his restaurants over the years. Utilizing a variety of techniques and mediums, from expressionistic to abstract, he participates in art shows and says he hopes "to share my comprehension of the world and its beauty with others through my art."

Outside of his primary endeavors, Mr. Koutouvides is extremely active in his community as a member of the American Hellenic Educational Progressive Association (AHEPA), the Bristol Chamber of Commerce and the Elks Club of New Britain. Additionally, through the restaurant, he and others hosted a golf tournament for 15 years, whose proceeds were split between the UConn Children's Hospital and the local church. Looking toward the future, he plans to retire soon and subsequently devote all his professional time and energy to his art work; on a more personal level, he will also be spending time with his three sons, one of whom played professional football for the Seattle Seahawks in his first four years, Denver Broncos and New England Patriots, and eight grandchildren. 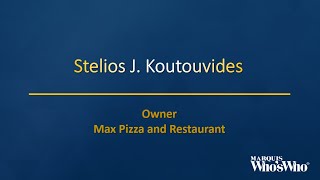