Mr. Cohn has been a volunteer at the United States Holocaust Memorial Museum since 2019

FORT BELVOIR, VA, October 18, 2021 /24-7PressRelease/ -- Frank Cohn has been included in Marquis Who's Who. As in all Marquis Who's Who biographical volumes, individuals profiled are selected on the basis of current reference value. Factors such as position, noteworthy accomplishments, visibility, and prominence in a field are all taken into account during the selection process.

A survivor and a liberator who has braved some of the most harrowing moments in history, Frank Cohn's life and career encompass the utmost courage, perseverance, heroism, dedication, and compassion. Now retired after serving for more than 30 years in the U.S. Army and lending his resourcefulness to the University of Maryland for more than a decade, the patriotic and humble Mr. Cohn continues to lend a hand as a volunteer and contributor at 96 years old.

Born in Germany in 1925, Mr. Cohn grew up as an only child with his parents in a middle-class area; his father, Martin, owned a popular successful sporting goods store. When he was seven, the Nazis began a nationwide "economic boycott" targeting Jewish-owned businesses, which forced his family to sell their shop and his father to sell cloth to various clothing and tailor stores. He would quickly encounter the harsh and propagandist Nazi agenda that had swept Germany—his favorite teacher began wearing a Nazi uniform with a swastika armband and his peers were joining the Hitler Youth. Being among the Jewish community, he was outcast and subsequently placed into a private Jewish school prior to the publishing of anti-Semitic legislation that called for all Jewish children to be expelled from German public schools. In the midst of this, his father left for the United States seeking an affidavit from relatives to get his wife and child out of the Nazi occupation; while he was gone, Gestapo officers came looking for him at the family home. Soon afterward, Mr. Cohn's mother sent a letter to his father urging him to stay in the United States, and she ultimately bribed a German consular clerk to add his name to a visa when she sought one for herself to travel to the United States. The Cohns reunited in New York in the late 1930s and their visitor visas were extended, due to President Roosevelt's Executive Order that permitted any and all German refugees to stay in America.

Feeling indebted to his new homeland for saving him, Mr. Cohn fully devoted himself to the Army when he was drafted in 1943 to fight in World War II. He would have happily volunteered to join but at the time, he was still technically classified as an "enemy alien" as he was from Germany; however, while in basic training, he was sworn in as a U.S. citizen. During his time in the war, he primarily served on an intelligence team due to his ability to speak German. He and his fellow soldiers in a 12th Army Group Intelligence unit known as T-Force were involved in the Battle of the Bulge, where they were engaged in trying to intercept German forces that had penetrated their lines in American uniforms, and the Rhineland and Central Europe campaigns. Additionally, he was tasked with targeting and guarding war criminals, mostly concentration camp commanders who would later be tried in the second Nuremberg trial, overseeing German Prisoners of War, and sending Nazi documents back to the United States. By the end of the war in 1945, he was promoted to Staff Sergeant and discharged, upon which he went into the Reserve while also pursuing a bachelor's degree in social sciences from the City College of New York—which he obtained in 1949.

Following this accomplishment, Mr. Cohn earned a regular commission in the U.S. Army that launched him into a lengthy military career from 1949 to 1978—during which time he earned decorations from the governments of Korea, Vietnam, Germany, Russia, and France, as well as a Meritorious Service Medal and a Bronze Star. Among his many actions, he is particularly proud of discovering the import of hard drugs, including heroin, through Holland while he was the commander of the 42nd Military Police Group—a customs unit in 1970s, which then established a working partnership among the Americans, Germans, and Dutch that continues to this day. In this role, he was also instrumental in situating women in the Military Police Corps as officers. He also continued his education through Army funding, with full pay, at Michigan State University, where he received a master's degree in police administration in 1963. He served as a Colonel in the Army from 1971 until his retirement from the military in 1978, at which point he shifted gears and searched for job openings. He landed on the University of Maryland, which was looking for someone to organize its human resources program—he felt it would be a good fit given his experience as a personnel chief for the Military Police Corps. He was quickly hired as an associate director within the university's Department of Resident Life. Although the department ran out of funds after a year, he was offered the job of supervising the renovation of dormitories—which he excelled at from 1979 to 1991. He retired in 1993 as the Director for Graduate Housing.

Although retired, Mr. Cohn remains busy and still believes in the power of giving back. He has been a volunteer at the United States Holocaust Memorial Museum since 2019 and at his retirement facility—where he serves as the liaison between the resident council and the building that houses residents in assisted living and nursing care. Additionally, Mr. Cohn has written an unpublished autobiography of his escape from Germany and his experiences during the war, and afterward, that has been kept at the Holocaust museum. Upon reflection of his life, he advised that the young generation today should always be loyal to their country as opposed to a political party. He also added, "If you have adversity, you should look at it in the most positive way. It could turn it around."

Mr. Cohn, who recently lost his wife of more than 72 years, Pauline—whom he cherished—is the proud father of Laura and grandfather of two. 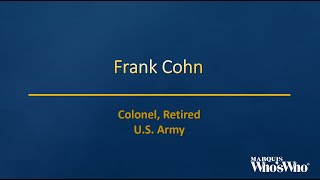