Willie Johnson, Jr. Distinguished for His Dedication to Community Advocacy

Dr. Johnson has been a supervisor of the Milwaukee County Board of Supervisors' 13th District since 2000

Dr. Johnson hopes to be remembered by peers and citizens as an approachable man who wanted the best for everyone.

MILWAUKEE, WI, November 02, 2021 /24-7PressRelease/ -- Willie Johnson, Jr. has been included in Marquis Who's Who. As in all Marquis Who's Who biographical volumes, individuals profiled are selected on the basis of current reference value. Factors such as position, noteworthy accomplishments, visibility, and prominence in a field are all taken into account during the selection process.

Through boundless energy and a personal mission to better the lives of people in his home state, Willie Johnson Jr, PhD has excelled as supervisor of the Milwaukee County Board of Supervisors' 13th District since 2000. In his post, for which he has been re-elected seven times, he takes great pride in his ability to help others and stand as an advocate for persons of color who continually works to ensure that the often overlooked population can thrive in life — physically, emotionally, spiritually, and financially. Speaking on his life and career, Dr. Johnson said, "Most of what I do is to serve other people.

Growing up in Milwaukee in the 1950s and 60s, and raised by hard-working and compassionate parents, Dr. Johnson proved himself to be a gifted student and even graduated valedictorian of his class at Lincoln High School. He subsequently attended Northwestern University in Illinois, where he ultimately earned a Bachelor of Arts in political science, and then later obtained a Master of Arts and a Doctor of Philosophy in humanities from the Wisconsin University of Theology; he also completed coursework for a Master of Public Administration at the University of Wisconsin-Milwaukee. Certified by the Social Work Registry, he was active for more than a decade as a social worker for the Milwaukee County Department of Health & Human Services. He also worked as a financial assistant worker in the department —appointments that would greatly shape his priorities as an elected official and public servant. In addition, he worked to advocate for the Citizens Utility Board, which provides a voice to residential and small business public utility customers, and often went house-to-house to talk to people about its many benefits. Over the years, Dr. Johnson has served on several economy- and community-related boards in an ongoing effort to combat the large concentrations of poverty in the greater Milwaukee area.

Dr. Johnson gravitated toward his current profession in 2000 when his girlfriend at the time, a union president, told him that the county supervisor seat for District 13 was newly open as the incumbent of 20 years had decided to step away. Realizing that such a position would allow him to create meaningful change in his community, he beat out the other candidates and ultimately won the election. For the last 21 years, he has considered it his greatest achievement in life to serve his constituents, not only those within his district but all citizens of Milwaukee County. In particular, he has been proud of advocating for minority business development and women's business development entrepreneurship, continuing efforts he made a year prior to his county employment as a volunteer at the Milwaukee Minority Chamber of Commerce. He previously assisted minority business development firms in completing applications to become certified for participation in the City of Milwaukee's Minority Business Enterprise Program.

Outside of his primary responsibilities, he has established himself as a reliable civic leader through his roles as a board member of NHS of Southeast Wisconsin, Economics Wisconsin, the Wisconsin Counties Association, and a member of the Milwaukee County Committee to Redevelop the Park East, Milwaukee Child Welfare Partnership Council, the Wisconsin Chapter of the National Association of Social Workers, and a member of Cambridge Who's Who. He has also served as a task group member of the Housing Opportunity Partnership for Southeastern Wisconsin and Strategies to Overcome Predatory Practices of the Metropolitan Milwaukee Fair Housing Council; chairman of the Learning for Life Committee of Three Harbors Council, Milwaukee County Disadvantaged Business Enterprise Steering Committee, and the Pension Study Commission; vice-chairman of Community Insurance Corporation; secretary and treasurer of the Milwaukee County Department of Family Care Managed Care Organization Governing Board; and president of the Wisconsin County Mutual Insurance Corporation Board of Directors—among several other positions. Over the course of his career, he has been affiliated with numerous organizations, such as the NAACP, Milwaukee Urban League, 100 Black Men of Greater Milwaukee, National Forum for Black Public Administrators, National Association of Black County Officials, National Association of Social Workers, Great Harambee Neighborhood Initiative, and Riverwest Neighborhood Association.

Upon reflection of his accomplishments, Dr. Johnson hopes to be remembered by peers and citizens as an approachable man who wanted the best for everyone, truly cared about people, and worked hard to bolster health and financial welfare through the practice of racial equity. In speaking to future generations, he hopes to instill the importance of being optimistic, civil toward one another, and doing all one can to foster financial stability within their families and their community. 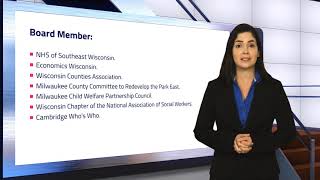