David M. Gravino Celebrated for Expertise in the Restaurant Industry

Mr. Gravino has been featured on CBS News and in USA Today, Travel Astoria, and The Providence Journal

A family-run and –geared restaurant adorned with the slogan "It's always summer at Iggy's," the business has boomed under David's leadership.

WARWICK, RI, November 19, 2021 /24-7PressRelease/ -- David M. Gravino has been included in Marquis Who's Who. As in all Marquis Who's Who biographical volumes, individuals profiled are selected on the basis of current reference value. Factors such as position, noteworthy accomplishments, visibility, and prominence in a field are all taken into account during the selection process.

For more than 30 years, David M. Gravino has been providing hospitality, great service, and delicious food across the state of Rhode Island through his skills as a restauranteur and business leader. The president of Iggy's Doughboys and Chowder House since the 1990s and Iggy's Boardwalk Lobster & Clam Bar since 2015, David has excelled as a hands-on administrator whose managerial approach and longtime passion for the culinary arts has built a highly rated establishment with several locations, more than 200 employees, and sights set on becoming a household name nationwide.

Born and raised in Warwick, Rhode Island, David finds it hard to remember a time when he wasn't around restaurants. He often worked with his father, Gaetano, who held jobs at establishments in the area until he and his wife, David's mother, Sally, took over a small clam shack in 1989. The shack ultimately became Iggy's, named after his father's old license plate, which started with "IG"; throughout his childhood, he and his family would refer to him as "Ig." By this point, Iggy's had five employees, mostly family members, and he had developed a serious interest in food service and the culinary arts, so he pursued a degree in the field at Johnson and Wales University—in 1992 he earned an Associate degree in culinary arts. He subsequently continued his studies there, but unfortunately during his senior year in 1994, his father passed away—and although he never initially planned on inheriting the business, he wanted to keep a promise he made to his father that he would keep Iggy's going in his wake. Upon obtaining a Bachelor of Science in culinary arts and food service management, David made the tough decision to not pursue his master's degree in order to utilize his skills at a large hotel or Disney and instead focus on growing Iggy's. As of now, David's wife, Julie, children, Gianna and David Jr., and sister, Mary Ann, all work in various capacities within the company, and he takes great pride in that.

A family-run and –geared restaurant adorned with the slogan "It's always summer at Iggy's," the business has boomed under David's leadership, with recognition for having the "best clam chowder in the country" by The Early Show and being named "one of the best seafood places in the country." He, as the face of Iggy's, has been featured at the Democratic National Convention, on "The Rhode Show" and CBS News, and in USA Today, Travel Astoria, and The Providence Journal. Additionally, he appeared on the popular show "Bar Rescue" as an expert restaurant and bar operator brought in to guide struggling managers and workers toward success. There are many reasons for his achievements in the tough industry—attending marketing meetings, studying and applying the operation practices of places like Disney, overseeing the distribution of the restaurant's products in various locations, ensuring that his managers are doing their jobs well, and assembling a great team of employees—but it boils down to the fact that he has never felt like he's working because of his genuine love for what he does and for that promise that he made to his dad years ago. David has enjoyed all aspects of their business and even saw great opportunity within the limitations of the pandemic, which he said, made Iggy's "think outside the box and strive to become more effective and efficient," predominantly through digital apps.

On the topic of business evolution, David aims to expand Iggy's over the next few years through franchising outside of Rhode Island and even have food trucks of theirs stationed around the country. Currently working on the necessary steps to make that happen, he wants Iggy's to become a renowned, year-round eatery known throughout the United States. 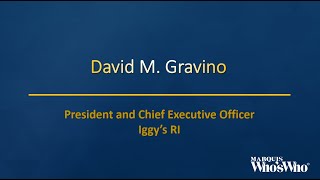