Mr. Dence graduated from Harvard Law School with a Bachelor of Laws in 1963

EAST GREENWICH, RI, November 19, 2021 /24-7PressRelease/ -- Edward W. Dence, Jr. has been included in Marquis Who's Who. As in all Marquis Who's Who biographical volumes, individuals profiled are selected on the basis of current reference value. Factors such as position, noteworthy accomplishments, visibility, and prominence in a field are all taken into account during the selection process.

Within a career that spanned four decades, Edward William Dence Jr. excelled in the fields of law, finance, banking, and education across several institutions. Officially retired in 2007, he reflects upon his accomplished professional life with pride as it took lots of hard work, determination, perseverance, and self-reliance to reach the ambitious goals he set for himself at a young age.

Growing up in a middle-class family in a rural town in Rhode Island, where many children did not pursue college, Mr. Dence sought a good education with the hopes of following in the footsteps of his uncle, Frank Conway, a successful lawyer who consistently encouraged him to enter the legal field. When he was in the ninth grade, his uncle took him to the Harvard Library, where he was transfixed by a portrait of Oliver Wendell Holmes Jr., the former associate justice of the Supreme Court and a Harvard Law School alum who was widely considered a brilliant jurist. The grandiosity of Harvard had a great effect on the young Dence, who knew then and there that he would one day attend the institution. Because he didn't have the financial means to go to Harvard, he focused on being an exceptional student at his strict Catholic school, La Salle Academy, to which he had to commute an hour every morning. After high school, he pushed himself further and earned a Bachelor of Arts from Providence College, where he graduated summa cum laude in 1959. Mr. Dence was ultimately accepted into Harvard Law School, and obtained a Bachelor of Laws in 1963—and followed up this accomplishment by being admitted to practice law in the states of Massachusetts and Rhode Island.

Mr. Dence launched his exciting career as an attorney for the New England Electric System from 1963 to 1968, after which he expanded his skills by becoming the general counsel, vice president, management committee member, and secretary at FleetBoston Financial, a bank that has since merged with Bank of America, from 1968 to 1985. He then found success as an attorney for Ropes and Gray Law Firm from 1985 to 1992 and for Locke Lorde from 1992 to 2007. In addition, he has served as a lecturer and an author on finance law issues for the Morin Center for Banking Law Studies at Boston University Law School. Outside of his main responsibilities, he was extremely active on the Stockholders' Advisory Committee for the Federal Reserve Bank in Boston, and excelled as a Trustee Chairman Audit Committee and Chairman Compensation Committee Member at St. Joseph Hospital, as well as a Trustee for the Southern New England Rehabilitation Center—holding these positions from 1994 to 2006.

The author of law- and finance-based articles for professional journals and a former member of the Rhode Island Bar Foundation, Mr. Dence was been recognized with acclaim throughout his career—and was even named among the "Outstanding Young Men of America" in 1972. In retirement, he enjoys swimming and spending time with his family, including his wife of more than 50 years, Claire, and their two children and granddaughter. In fact, Mr. Dence considers marrying "the right person" and staying married for as long as they have been to be the proudest achievement of his life. With a strong commitment to Claire and the rest of his family, Mr. Dence advised others, above all else, to always "make your spouse feel special." 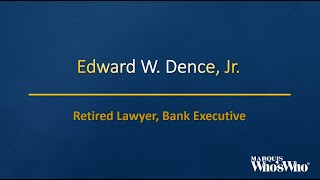