Ms. Thomassen has lectured worldwide and embarked on numerous medical and non-medical missions

LYNNWOOD, WA, November 29, 2021 /24-7PressRelease/ -- Pauline F. Thomassen, RN has been included in Marquis Who's Who. As in all Marquis Who's Who biographical volumes, individuals profiled are selected on the basis of current reference value. Factors such as position, noteworthy accomplishments, visibility, and prominence in a field are all taken into account during the selection process.

Pauline F. Thomassen, RN, has wanted to be a nurse since she was very young. Her mother was always involved in child welfare, eventually becoming the director of child welfare services in their county, and it moved her heart to see that many children come in and out of their house. From early on, she knew she had to do something with her life that would help people. However, when she was just a junior in high school, she was told by her guidance counselor that she simply didn't have the "moxie" to achieve her goal and wasn't good enough to be a nurse—at this, she was driven to tears. Despite the harsh words and the negative impact this evaluation had on her, Ms. Thomassen never gave up and, with the encouragement from her mother, she was able to push through the obstacle of self-doubt.

Ms. Thomassen prepared for her profession, and proved to be a natural at it, while working at Swedish Health Services, formerly Swedish Medical Center, in Seattle as a certified nursing assistant—and within the hospital system complex, she had advanced to working in specialized areas, such as the emergency room and the ICU. A single mother with three small children, she struggled financially and worked seven nights a week on a rotating basis, but over time her work schedule was reduced to just one night. Unable to maintain her household on her earnings, she strived to make something of herself and go to school—with support from her mother and Social Services, as well as a Colorado Student Grant, she entered Southern Colorado State College in 1971 and its nursing program the following year. Driven by her faith, compassion for others, love for mentoring young people, and both the ability to listen and take action when needed, she achieved her dream when she earned an associate degree in nursing and a Bachelor of Arts in in nursing from the college in 1974 and 1975, respectively. In addition, she had passed her boards and obtained a license to practice nursing in the state of Washington. With these certifications, her mother went back to her high school and showed them off to her former counselor.

Ms. Thomassen launched her primary career as a staff nurse in the orthopedic unit and a preceptor for the orientation of nurses and student registered nurses at Swedish Health Services, formerly Swedish Medical Center, in Seattle—where she excelled from 1975 until her retirement in 2002. In addition to her main responsibilities, she also served as a clinical spine educator at the center from 1998 to 2002. Outside of the hospital, her devotion to bettering others has been felt around the world, having lectured throughout Manzini and South Africa, lent her expertise as a guest speaker at the University of Washington and Raleigh Fitkin Memorial Hospital in Russia, and embarked on numerous medical and non-medical missions—everywhere from Peru to Mexico to Mississippi in the aftermath of Hurricane Katrina. She was particularly proud of a missionary trip to the Philippines in the early 2000s, which began as a development of an orphanage and ended up as a full-fledged neighborhood institution for young people, which is now known as Aeta Children's Home. She and her peers not only helped with medical issues among the children, but with setting up clinics for nearby mountain people and building both a church and a medical center. Over the years, Ms. Thomassen made seven trips there and has seen numerous success stories, one of which being a young girl at the home who dreamed of growing up and becoming a teacher—she ultimately earned her teaching degree and the two have reunited many times.

A brilliant and impactful mind in her field, Ms. Thomassen authored "Spinal Disease and Surgical Interventions" in 1995 and co-authored "Making Sense of Minimally Invasive Spine Surgery." Though retired, she has remained connected to her industry as a member of the National Association of Orthopaedic Nurses and stays active within her community. Always youth-oriented, as a loving mother of five with 15 grandchildren, 20 great-grandchildren, and nine great-great-grandchildren, she encourages those in the next generation to follow their dreams and put their faith in a higher power—as, she noted, there will always be people put in one's path who will help and encourage you toward your goals.

Upon reflection of her life and career, Ms. Thomassen is immensely happy to have left the field of nursing, particularly in terms of spinal education and surgical interventions for spinal disease, in a better place than when she first entered it. 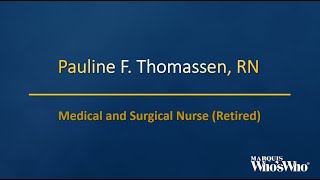