For William Thomas Mills, a successful career in real estate was hereditary.

COLUMBIA, SC, December 13, 2021 /24-7PressRelease/ -- William Thomas Mills has been included in Marquis Who's Who. As in all Marquis Who's Who biographical volumes, individuals profiled are selected on the basis of current reference value. Factors such as position, noteworthy accomplishments, visibility, and prominence in a field are all taken into account during the selection process.

For William Thomas Mills, a successful career in real estate was hereditary.

Born and raised in South Carolina, Mr. Mills grew up surrounded by discussions of commercial real estate as both his father and grandfather excelled in the field—with the former owning a commercial real estate, property management, and commercial brokerage firm. Through them, he always had a network, several mentors, resources, and a mapped out future; his brothers, too, followed in the footsteps of the family. However, that's not to say he didn't have other professional interests. While attending Wofford College in Spartanburg, he had law school aspirations and even served as a legal courier for Ellis Lawhorne & Sims PA, and completed a bankruptcy law internship at Bailey Law Firm and then a civil law internship at the South Carolina Attorney General's Office. But in his junior year, he earned his real estate license from the South Carolina Real Estate Commission—having decided it was the work that he loved most—and then obtained a Bachelor of Arts in economics in 2011.

With an expertise in retail brokerage sales and leasing, interpersonal relationships, and communication, Mr. Mills began as an associate at Newmark Grubb Wilson Kibler, now Wilson Kibler, known as "South Carolina's Trusted Commercial Real Estate Advisors," where he cut his teeth in the industry from 2011 to 2017. He then advanced to the role of senior associate at the firm, from 2017 to 2019, and has since been the senior brokerage associate at Trinity Partners in the city of Columbia. Despite his familial connections, he set out from the start to make his own way without the help of nepotism. In the difficult and competitive business of real estate, he has attributed his incredible success in brokerage, development, commercial real estate, and rise through the ranks to his creativity, problem solving skills, flexibility, patience, independence, aggression-when-necessary, and the mantra that "no deal is done until it closes….never assume anything." Additionally, he was greatly shaped by his first bosses when he graduated from college, including Marshall Kibler, his first broker-in-charge who encouraged him to eventually own property in order to elevate his success in brokerage. So far, he considers his crowning professional achievement to be his role in a partnership that developed a multi-tenant Starbucks; a tenant that was lined up fell through and so in order to make the deal work, he had to find another national credit tenant to take their place. He not only found the tenant, but sold the property and made a huge profit earlier this year.

In recognition of his accomplishments, Mr. Mills has received the Power Broker Award for "Top Retail Leasing Broker" from the Costar Group in 2016 and was named a "Top Producer" by Wilson Kibler for a few years in a row. In addition, he has earned his Eagle Scout Award presented by the Boy Scouts of America and was named to the Dean's List at Wofford College—where he also served as secretary and rush chairman for Kappa Alpha Order between 2008 and 2010.

Looking toward the future, Mr. Mills hopes to do more development, whether it's retail or otherwise, and would ultimately like to honor his mentor's words of advice and earn more property. Although his career is still young, he is able to reflect upon it with pride—especially when it comes to succeeding in all areas of real estate. He believes that through hard work, good things happen. 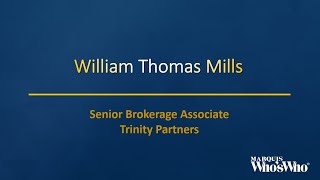