Frank A. Salamone Honored for His Work in Anthropology

ROCHESTER, NY, January 10, 2022 /24-7PressRelease/ -- Frank A. Salamone has been included in Marquis Who's Who. As in all Marquis Who's Who biographical volumes, individuals profiled are selected on the basis of current reference value. Factors such as position, noteworthy accomplishments, visibility, and prominence in a field are all taken into account during the selection process.

Over the course of 40 years, Frank A. Salamone, PhD, has developed and shared his expertise in cultural anthropology as a devoted educator, administrator, researcher, and author. With a focus on Nigeria and other African nations, as well as Italian-Americans in New York City, Dr. Salamone has left a significant impact on each and every student he has taught through his charismatic passion for his subject matter, abilities to listen and communicate well, perseverance, and own strong educational background.

A native to Rochester, New York, Dr. Salamone first pursued a higher education at St. John Fisher College, where he earned a Bachelor of Arts in 1961, and subsequently obtained a Master of Arts in history from the University of Rochester in 1966. In the midst of his degrees, he taught at a high school for four to five years, but knew that he ultimately wanted to educate college students—though in order to reach that level, he would need to earn his doctorate. While in pursuit of that, a supervisor of his found him to be "too much of an activist" in regards to the Vietnam War, which had been raging at the time, and had issues with him staying in the program. By this point, Dr. Salamone had established himself in the field of anthropology through his extensive research and writing, so much so that Dr. Charles Frantz, the head of the American Anthropological Association, personally invited him to study at SUNY Buffalo—where he earned a Doctor of Philosophy in 1973. Now equipped to embark on his dream professional journey, he felt an immense a debt of gratitude to Dr. Frantz—with whom he had become close friends. He later said he "would not be where he is today if it wasn't for Dr. Frantz" or Dr. Joe Cassagrande, another mentor—two people who took him seriously, set an example, helped him along the way, and always stood by for support.

Dr. Salamone eventually found his place at Iona College, a private Catholic school in New York, excelling an associate professor from 1981 to 1993—and briefly at another campus in 1989. He also served as chair of the sociology and anthropology program at the university, and ultimately earned the rank of Professor Emeritus upon retiring. In addition, he has extended his services as an online professor for the University of Phoenix for 16 years. A prolific author as well, he wrote and published "Gods and Goods in Africa: Persistence and Change in Ethnic and Religious Identity in Yauri Emirate, North-Western State, Nigeria" in 1974, a monograph in which he analyzed "the mechanisms through which ethnic groups in Nigeria maintain or modify their ethnic identities." He has also written 119 academic publications and has 558 scholastic citations; his many articles include "The Heroic Anthropologist Rides Again: The Depiction of the Anthropologist in Popular Culture," "The Depiction of Masculinity in Classic Nigerian Literature," "Missionary Education as an Indicator of Differential Development," "Competitive Conversion and Its Implications for Modernization," "Growing Up with the Rochester Red Wings in the Forties and Fifties," and "The Generation of Ethnic Persona and Identities: A Case Study of Kamberi of Nigeria," among several others. Among the many highlights of his career, he considers the greatest to be his firsthand work with the people in Yauri, Nigeria—he has received numerous research grants over the years, including an annual grant for 20 years for these visits.

A longtime member of the American Anthropological Association, African Studies Association, and Senior Anthropologists Association, Dr. Salamone has remained active in his field even though he is retired. Looking toward the future, he plans to keep researching and writing while also spending quality time with his seven children, 11 grandchildren, and great-grandchild. To those wanting to enter his profession, he advised that it's important to listen to the people around you, talk to others, be patient, and read voraciously. Most importantly, though, he said, "Never give up." 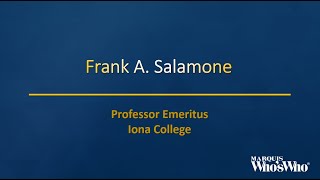