Mr. Holland has accrued more than 50 years of professional experience—most recently as the president of A Bit of Boston Real Estate, Inc.

His film work has been broadcast on NBC, ABC, CBS, PBS, BBC, and the Travel Channel over the years.

BOSTON, MA, January 10, 2022 /24-7PressRelease/ -- James R. Holland has been included in Marquis Who's Who. As in all Marquis Who's Who biographical volumes, individuals profiled are selected on the basis of current reference value. Factors such as position, noteworthy accomplishments, visibility, and prominence in a field are all taken into account during the selection process.

Gifted in many areas and disciplines, James R. Holland Sr. has accrued more than 50 years of professional experience—most recently as the president of A Bit of Boston Real Estate, Inc., where he excelled from 1982 to 2017. Prior to this role, he climbed the real estate ladder and previously found success in the fields of film and photography, his first passions in life, and has authored numerous books and articles over the course of his lengthy career.

Mr. Holland became transfixed by the medium of photography when he was young—an interest that was first sparked by "The Family of Man," an exhibit at the Museum of Modern Art that ran for several months in 1955 and assembled hundreds of images by photographers from around the world as a display of "global solidarity" in the decade following World War II. All throughout elementary and middle school, he wrote articles and reviews of books and movies he enjoyed, a habit that continued for the rest of his life. While a senior in high school, he worked on the yearbook and had firsthand experience with photography; he also worked for the school newspaper and wrote book reviews. Guided by his interests, he completed coursework at Principal College in Illinois from 1962 to 1964, and then earned a Bachelor of Fine Arts, with minors in art, art history, journalism, and economics, from Ohio University in 1966—working as a freelance photographer all throughout. Following this degree, he did postgraduate coursework at the University of Missouri School of Journalism and then became a photography intern at the National Geographic Society in Washington, D.C., where he launched his career as a contract photographer for the magazine from 1967 to 1968. During this time, he traveled the world and both explored and captured terrains not seen by many Americans. Mr. Holland's revered photographs have been published by numerous media outlets for the last 50 years

From 1969 to 1974, Mr. Holland excelled as an award-winning audiovisual and film producer for the Christian Science Center in Boston, after which he decided to shift gears and become involved in real estate, first as a developer and then the president at Brownstone Properties from 1975 to 1977. Equipped with a license, he served as a real estate broker for Street & Co., Inc. from 1978 to 1982 before taking the lead at A Bit of Boston, beginning in 1982.

As has been the case throughout his life, his varying interests tend to crisscross, and in the midst of his real estate activities, his passion for local history and journalistic eye started to emerge—culminating in the publishing of "Boston's Notable Addresses: Historic Homes and the Residents That Made Them So" in 2012, which at that point was his 13th book. A prolific photojournalist, he has authored "The Amazon" in 1971, "Mr. Pops" in 1972, "Tanglewood" in 1973, "W.O'K's Weird Wacky Wonderful World: The Art of William O'Keefe" in 2006, "Diamonds Are Waiting For You: Crater of Diamonds Where Dreams Can and Do Come True" in 2007," "Klan Rally: A Photographic Essay" in 2008, "Santa's Elves Revolt" in 2008, "Adventure Photographer" in 2009, "Waffle: A Beacon Hill Dog" in 2009, and "Fisheyes" in 2009, in addition to numerous magazine articles. More recently, Mr. Holland has written "Politics: Puns and Parody" and "Seeking God: The Religious Paintings of William O'Keefe," and was the subject of an article published by Shunga Gallery titled "A Conversation with a Boston Collector on Picasso, Shunga, Dali, and Much More." In the piece, Mr. Holland details his expansive collection of historic art, photography, paintings, and books, as well as his notable encounters—including one with Salvador Dali. For several years, starting in 2009, he worked as a movie critic for Basil & Spice, a columnist for the McClatchy-Tribune News Service, and was at one time one of Amazon's "Top 500 Reviewers." In addition, his film work has been broadcast on NBC, ABC, CBS, PBS, BBC, and the Travel Channel over the years.

With numerous accolades to his name, Mr. Holland has earned an award from USA Book News, a Bronze Medal from the International Film and TV Festival, an individual's photography film competition award, a Newsweek/Bolex Documentary Film Award, a World Press Competition Award, an award presented by the National Press Photographers Association, and an Eric Hoffer Excellence Award, among many others. He has also maintained his connection to his industry as a longtime member of numerous organizations, such as the Griffin Museum of Photography, Boston University Photographic Resource Center, National Press Photographers Association, American Society of Media Photographers, Friends of Beverly Hills Public Library, and Samuel Fletcher and Angeline Drury Society. A devoted student of martial arts as well, Mr. Holland was named as the National Karate Champion by the Amateur Athletic Union and earned national rankings in 1989, and has been a member of the North American Sport Karate Association for several years.

With his wife of almost 50 years, Helen, with whom he entered the real estate industry, Mr. Holland has three children and three grandchildren. Looking toward the future, he plans of publishing more books. 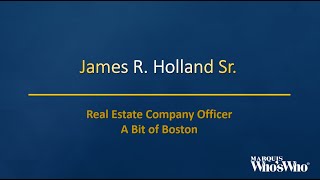