Notably, Ms. Wheeler-Mains became an assistant manager at Avon and a member of the Avon President's Club

ATHENS, OH, January 10, 2022 /24-7PressRelease/ -- Wanda Wheeler-Mains has been included in Marquis Who's Who. As in all Marquis Who's Who biographical volumes, individuals profiled are selected on the basis of current reference value. Factors such as position, noteworthy accomplishments, visibility, and prominence in a field are all taken into account during the selection process.

For 65 years, Wanda Lynn Wheeler-Mains has excelled in her role as an Avon representative, whose expertise in the products sold by the renowned cosmetics, fragrance, and personal care company is only eclipsed by her love and compassion for people. Guided by the motto "Love your neighbor as yourself," she has found success not just as a personable saleswoman and trainer of new employees, but through selfless work in her community.

Growing up, Ms. Wheeler-Mains was a dedicated and hardworking student; in fact, she was among a select group of students who was able to complete her education at Chauncey High School in Ohio in just three years—as she had previously taken both seventh and eighth grade in one year in Hazleton, Pennsylvania. Upon graduating, she married, settled down, and had a child. It was while expecting her second that she realized that their home would need another income, so she joined Avon at 22 years old in 1956. Kind, social, and engaging, the job of selling the company's litany of products door-to-door—such as skin and hair care products, cosmetics, jewelry, household items, housewares, perfumes, colognes, clothing, shoes, slippers, purses, and holiday decorations—proved to be a natural fit for her immediately. She loved meeting people and taking care of her clients, many of whom became close personal friends and even later became Avon representatives themselves. Attributing her early success at the company to her manager, Elizabeth McDaniel, Ms. Wheeler-Mains ultimately became an assistant manager at Avon, and was awarded membership within the Avon President's Club. If she had to choose, she said, her favorite products from their collection include the Far Away Cologne Mist, Skin So Soft Lotion, and Strawberry Lip Balm.

Outside of her primary endeavors, Ms. Mains has also proven herself civically, serving as a communications secretary, personal ministry member, and pianist for the Seventh-Day Adventist Church, as well as a volunteer for Hope for Humanity's fundraiser events since 1971. Having been the associate editor of her school newspaper and a student of writing in college courses, she has always had a passion for crafting words—which she displayed as a contributor of poems and essays for "Pickin' Fleas: Writers Grooming Writers" from 2002—a book of written works assembled from the Athens Writers Association, of which she is a proud member. A gifted piano player and singer as well, she often sings alto with local singing groups and performs in nursing homes.

Upon reflection of her life and career, Ms. Mains hopes to be remembered as a caring person who was knowledgeable about her work and truly loved people. Her advice for those wishing to follow in her professional footsteps is to meet as many people as possible, take care of one's clients, and become friends with them. Looking toward the future, Ms. Mains hopes to be happy with her friends and family, and thinking of her late husband, Charles, and her son, Loren, who has also passed away. She spends time with her children, Sherry, Wendland and Wendy McGee, as well as her six grandchildren, nine great-grandchildren, and five great-great-grandchildren. 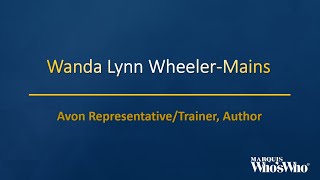