Ms. Collier noted that she has gained respect for humanity and all living things and stressed the belief that together "we can learn to live in harmony."

PRIEST RIVER, ID, January 20, 2022 /24-7PressRelease/ -- Donna L. Collier has been included in Marquis Who's Who. As in all Marquis Who's Who biographical volumes, individuals profiled are selected on the basis of current reference value. Factors such as position, noteworthy accomplishments, visibility, and prominence in a field are all taken into account during the selection process.

With perseverance, a hands-on approach to any project she tackles, and a desire to leave the world a better place than she found it, Donna L. Collier has excelled across numerous industries—including real estate development, construction management, and numerous wildlife and environmental services—throughout an accomplished career. Though she never anticipated the professional path she wound up on, Ms. Collier always knew that she would find success in whatever she did. "It is important to me that I get the job done," she said. "People sit around and talk about things for years and years…it is really important to just get up and get it done."

Growing up in Utah, Ms. Collier developed her love for nature at a young age; at 10 years old, she was gifted a camera for Christmas and began taking pictures of wildlife she saw while hiking. This passion became lifelong and would later turn into a rewarding career in wildlife photography and environmental sustainability. Incredibly sharp and successful in academia, she graduated from high school with honors and received a full scholarship to Ricks College in Southern Idaho, where she received a 4.0 grade point average. However, in the midst of pursuing her bachelor's degree at the institution, she fell ill and had to drop out early; despite the setback, she was highly motivated to continue her self-education and has maintained it ever since.

The launch of her career truly began after she accrued years of valuable management experience—having supervised and trained more than 40 office managers for a nationwide corporation and acquired a final permit for a 500-lot residential golf course development, among other leadership tasks. After working with a civil engineer to streamline project approvals through regulatory agencies, she had purchased a property, a shuttered and contaminated Louisiana Pacific sawmill site, which she and others cleaned up with the intention of exploring a new real estate development project in the form of a golf course community. But before moving forward with the project, she was contacted by members of the Corps of Engineers, who asked if she would be willing to develop a federally approved wetland mitigation bank geared toward environmental restoration. After studying the program and its requirements for certification, and with a built-in love for nature, Ms. Collier jumped at the opportunity to develop the first and largest wetland mitigation bank in the State of Idaho, feeling as though the program fit her beliefs better than her previous mission did. She ultimately turned the 291-acre property into a for-profit wetland bank, Valencia Wetlands Trust in 2006, and has been serving as its managing partner ever since.

Ms. Collier found subsequent success within the National Mitigation Banking Association, serving as treasurer from 2014 to 2015, a member of its board of directors from 2013 to 2017, and secretary from 2015 to 2017. In addition, she has been active on the Leadership Council for the National Small Business Association since 2016 and stepped into her ultimate role as the chairwoman and founding board member for the National Environmental Banking Association, starting in 2017. In that role, she routinely meets with regulatory agencies and congressional representatives regarding the mitigation banking industry and is backed by the support of environmental banking businesses from across the nation that are committed to high standards when it comes to the restoration and preservation of wetlands and natural habitats, and a helpful solution to environmental destruction. Over the course of her time with NEBA, she has found it extremely rewarding to be able to make a difference; she and others just recently got language passed through the legislation and appropriations bill, and approved by both houses of Congress, which required regulators to be more diligent in enforcing consistent standards in the rules that govern environmental impact. "When we bankers replace environments that are being disrupted and developed, it is permanently protected where before it was not," Ms. Collier said of her work. "Those protected sites are growing and at the same time, development is allowed to proceed, so it is working on both sides."

Additionally, with more than three million photographs of wildlife to her name, Ms. Collier has worked to document nature all for the process of environmental restoration. She is a steering committee member for the EPA, a role in which she helps create manuals to increase the efficiency of regulators, and has contributed to the steering committee for the National Mitigation and Ecosystem Banking Conference. Outside of her primary responsibilities, she frequently speaks to college students in mitigation banking courses. She conducts school tours and provides in-class presentations for children.

Upon reflection of her incredibly impactful life and career, Ms. Collier noted that she has gained respect for humanity and all living things and stressed the belief that together "we can learn to live in harmony." She certainly lives that way on a personal level as the mother of four, grandmother of seven, and great-grandmother of two. 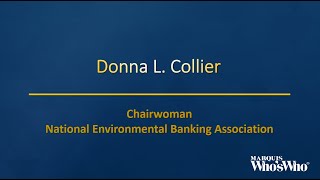