Notably, Mr. Burch has been featured in the "Construction Equipment Guide" and honored by the Contractors Association

HELENA, MT, January 26, 2022 /24-7PressRelease/ -- Steven R. Burch has been included in Marquis Who's Who. As in all Marquis Who's Who biographical volumes, individuals profiled are selected on the basis of current reference value. Factors such as position, noteworthy accomplishments, visibility, and prominence in a field are all taken into account during the selection process.

Steven R. Burch, the president and a partner at Missouri River Contractors, LLC—a company that specializes in excavating, hauling, and environmental remediation work—was almost destined to excel in his industry, as it was in his blood.

Growing up in Michigan, he watched his father, Richard Burch, manage projects as an excavation contractor; he served as a great mentor to him and motivated him to follow in his footsteps in the field. Through his father, he learned the ropes of the job and knew from his formative years that when you "treat people fairly, they work hard for you…you need to lead by example and share in the victories." Following high school and the completion of coursework in engineering at St. Clair County Community College, he began a professional journey in the areas of construction, excavating, reclamation, and demolition that has since spanned more than 25 years. Always with a strong and happy work environment, and backed by an expertise in building bridges, wastewater treatment, and aqua systems, Mr. Burch has managed the construction of subdivisions, interstate highways, dredging operations, river reconstruction, mine reclamation, and manufacturing sites.

Mr. Burch began as a manager of Oldcastle Materials, Inc. an Atlanta-based subsidiary of CRH that supplies asphalt, concrete, and other building materials, as well as construction and paving services. He then opened up his own agriculture, construction, and mining machinery firm, Burch Industrial Services LLC—which has been in operation since 2007—and in the midst of that appointment, he served as an equipment manager at Helena Sand & Gravel, Inc. and Omg Holdings, LLC in Montana between 2008 and 2016. Additionally, in 2016, he and a group of investors created a strong business plan and started Missouri River Contractors, LLC, taking the company from $.5 million to about $33 million today. The organization's first major job in the year of its inception was a historic mine clean-up with about 25 employees, which took about 30 days to fully organize. On this accomplishment, Mr. Burch said, "It was pretty remarkable to put that together in a month…the job was pretty good for us and got us on the map." Today, Missouri River Contractors is made up of 86 employees, all of whom he attributes to his success; looking toward the future of the business, he strives to continue providing a healthy environment where the employees can soar in their careers with good pay, while also being able to balance a happy life with their families.

Outside of his main endeavors, Mr. Burch has been a volunteer with the Yellowstone Forever Institute, Wild Montana, and an animal rehabilitation center. He has been featured in the trade publication "Construction Equipment Guide" and was recognized with an award by the Contractors Association. He also remains active within his community as a member of his local branch of the Chamber of Commerce. To those who wish to pursue a career like his, Mr. Burch advised them to "never give up, never take no for an answer, and always be fair" to employees and colleagues, adding that "there are joys in seeing people develop and succeed in their lives and professions." When he isn't leading a multimillion-dollar company, he enjoys spending time outdoors, be it hunting, kayaking, or hiking. 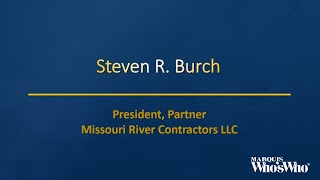