Nikolas Lamprou Made His Dream a Reality at Niko's Souvlaki

Mr. Lamprou is living the American dream as an up-and-coming restaurateur.

Looking toward the future, Mr. Lamprou hopes to have a total of 51 restaurants, one in each state, including the two already in New York.

ASTORIA, NY, January 26, 2022 /24-7PressRelease/ -- Nikolas Lamprou has been included in Marquis Who's Who. As in all Marquis Who's Who biographical volumes, individuals profiled are selected on the basis of current reference value. Factors such as position, noteworthy accomplishments, visibility, and prominence in a field are all taken into account during the selection process.

Born and raised in Greece, Nikolas Lamprou has worked in the food industry since he was a child, getting his first taste of what would become a career as a successful restauranteur while lending a hand in his aunt's eatery. It was a passion of his that blossomed in those early days that only grew with him. Further encouraged by his grandfather, who taught him to always chase his dreams, he relocated to the United States in 2012 at the age of 20, determined to work hard and do some chasing—carrying his background and culture with him at all times in the delicious meals he prepared. Additionally, he earned an Associate of Arts from the National and Kapodistrian University of Athens two years later, and subsequently launched himself into work within the food and beverage industries.

"It takes some time to achieve something…you need to be patient and a hard worker," Mr. Lamprou said. "Don't get disappointed as the beginning is the hardest point. I never stopped dreaming." It took six years of pouring his entire self into his talent, and plenty of determination and self-motivation, but in 2020, during the COVID-19 lockdown, he opened an authentic Greek restaurant, Niko's Souvlaki, in Astoria, Queens. As the owner of the Greek establishment, he and his staff pride themselves on their handmade Kalamaki, meats, gyro, salads and more, as well as their utilization of "the best Greek herbs and slow roasts," all inside of a welcoming environment filled with great ambiance—including wall murals, bright lights, and an outdoor patio; top-notch customer service; and smiling faces. While he admitted that the timing of the business' opening was a risk, his skills and passion won out in the end; the restaurant has been a grand success among the community and he is in the process of starting up a second location in Sunnyside, as a strictly digital version of Niko's Souvlaki operating out of a building owned by Uber Eats. Looking toward the future, Mr. Lamprou hopes to have a total of 51 restaurants, one in each state, including the two already in New York.

"It is an achievement when I see that my restaurant is doing well…it's really rewarding and makes me want to grow my business and personality," he said.

Upon reflection of his success so far, Mr. Lamprou attributes it all to his positivity, tenacity, and focus on ensuring that people enjoy not just the food but the overall experience of dining at his establishment. He advised that his fellow dreaming restauranteurs put their hearts into what they're doing, never lose hope, and that "everything will worth smoothly for you if you love what you're doing." 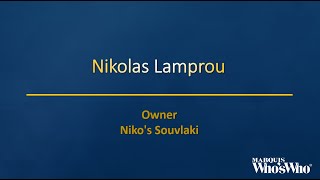