Ms. Turner has dedicated herself to ensuring that the rights of American voters are protected at the polls

OMAHA, NE, March 16, 2022 /24-7PressRelease/ -- Deborah Ann Turner has been included in Marquis Who's Who. As in all Marquis Who's Who biographical volumes, individuals profiled are selected on the basis of current reference value. Factors such as position, noteworthy accomplishments, visibility, and prominence in a field are all taken into account during the selection process.

The president of the League of Women Voters of the United States, Deborah Turner has dedicated herself to ensuring that the rights of American voters are protected at the polls. Growing up in Iowa, Dr. Turner felt herself pulled toward the field of medicine. She was inspired in that regard by her older sister, Delores, who was a registered nurse nurse. She would show Dr. Turner around the operating room, and even arrange for her to meet with patients. Her work as a nurse and the way she related to the patients greatly impressed Dr. Turner. As she grew older, she realized there was more to medicine and felt the pull towards the discipline become stronger, especially because her sister's husband also strongly encouraged her. By the time she was in junior high school, it became her mission to go to medical school, which she did, earning an MD from the University of Iowa in 1978.

With her degree in hand, Dr. Turner continued her training at the University of Iowa, completing a residency in obstetrics and gynecology in 1983, before taking on a fellowship in the same discipline at MD Anderson Cancer Institute in Houston, Texas. She practiced in the field of gynecologic oncology for 35 years, serving such medical facilities as the Genesis Medical Center in Davenport, Iowa, Mercy Cancer Center in Mason City, Iowa, and Mercy Medical Center in Des Moines, Iowa. Near the end of her medical tenure, Dr. Turned switched gears professionally, earning a JD from Drake University. She pursued a law degree mainly because she wanted to acquire in-depth knowledge on how policy affects education and medicine, which are the fields she operates in. She also believed that having a legal background would be highly useful to her position in the Board of Regents for the State of Iowa. Her interest in the law springs from the idea that a good understanding of the law is a prerequisite for understanding what is happening in the country and how to make a difference in any of its sectors, whether in medicine, education, or any field.

A few years after earning her JD, Dr. Turner became state vice president of the Iowa Board of the League of Women Voters, beginning a new chapter of her professional life. She advanced through the organization, joining its national board of directors in 2016 and becoming president in 2020. Founded in 1920, the League has evolved from its roots as a women's suffrage group to a grassroots movement aimed at ending partisan gerrymandering, educating voters and promoting the success of qualified women candidates for political office, among other goals.

Although Dr. Turner has been recognized a number of times for excellence in both her medical and civic work, she finds the Certificate for Compassionate Care she received from the Schwartz Center the most valuable to her, because that honor is given only after a person who appreciates her service as a physician intentionally seeks it out and sends a letter of recommendation to the center to consider the candidate for the commendation. It touched her heart that somebody she helped through her practice felt it was important enough to go through the nomination procedure. The honor means a great deal to her, as she believes that being in medicine, and even in her current role with the League of Women Voters of the United States, is all about having a meaningful impact on people's lives.

When asked about what advice she would pass on to other professionals, Dr. Turner said, "Let themselves feel what they feel and who they feel like they want to be, and let that grow in them." As she discovered herself, so too must other professionals grow into their own destinies. "I think the majority of my work I have done has been a way of helping to make other people's lives better, and serving as a role model and mentor for those coming after be because I had great role models and mentors," said Dr. Turner. "If I could achieve those two things that makes me smile." 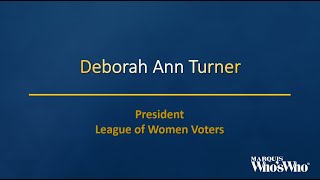