Marie Stephens is Proud to Bring Nothing Bundt Cakes to Oklahoma

Ms. Stephens has excelled as an entrepreneur and business owner since 2011

In addition to Nothing Bundt Cakes, Ms. Stephens has opened a new business very recently, Dare to Develop Consulting.

BROKEN ARROW, OK, March 16, 2022 /24-7PressRelease/ -- Marie Stephens has been included in Marquis Who's Who. As in all Marquis Who's Who biographical volumes, individuals profiled are selected on the basis of current reference value. Factors such as position, noteworthy accomplishments, visibility, and prominence in a field are all taken into account during the selection process.

The owner of Nothing Bundt Cakes since 2011, Marie Stephens turned a passion for entrepreneurship into a thriving career in customer service. Growing up in Oklahoma, she initially thought of pursuing a career in education, and she completed studies toward that end, earning a Bachelor of Science in early childhood education from East Central University in 1992. Following this, she became an elementary school teacher for nearly a decade, but an interesting development transpired that caused her to rethink her choice in career. She encountered a number of people in Oklahoma that wanted to start a business, but did not want to operate it. Ms. Stephens started a conversation with these individuals, and by the end of it, she decided that she wanted to branch out, leave education and explore her passion for entrepreneurship; all that remained was to select the perfect venture.

In 1997, Dena Tripp and Debbie Shwetz merged their kitchens to create a bakery, which they called Nothing Bundt Cakes. Years later, the bakery had grown so successful that it was opening franchises across the United States. Ms. Stephens had heard of Nothing Bundt Cakes during her time in the South, so the idea of purchasing a franchise was something that she could envision herself doing, however she wanted to make sure the culture of the business fit her own. Though there were no stores near her at the time, there was one in Texas, so she drove down and purchased one of every item that the store offered. She recalls being deeply impressed, both with the quality of the products and the excellent customer service with which they were provided. Seeing the way the bakery had been designed, and how all of the pieces of the store worked together in harmony, and, of course, tasting the cakes, sealed the deal for Ms. Stephens, and she resolved to bring the great taste of Nothing Bundt Cakes to Oklahoma.

To Ms. Stephens, Being able to create something from nothing that has more value than just the cake itself. "I feel it's been part of my life's work," she said, "and now I am able to spread that joy, spread that happiness." She is also proud to have been able to provide so many jobs to her community. "There have been so many young staff members I feel I have helped…to be able to teach them what a good leader should look like."

In addition to Nothing Bundt Cakes, Ms. Stephens has opened a new business very recently, Dare to Develop Consulting. Through this business, she works with other leaders to help them create healthy employee engagement and employee culture. The business came about as a natural result of Ms. Stephens having been asked to speak to business owners on multiple occasions, so she had the idea to turn it into a business. Among her most important lessons, she teaches business owners not to be afraid of making mistakes, since those can always be corrected later. She advises others to ask questions, and always put in the hard work that is necessary, as it will pay dividends later. When asked about how she would like to be remembered by future generations, Ms. Stephens said that she wishes to be remembered for her passion and compassion, as well as her integrity and fairness. 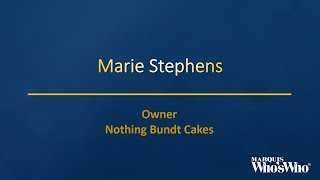