Evan Barr Douple Made Strides in the Fight Against Cancer

VERO BEACH, FL, May 04, 2022 /24-7PressRelease/ -- Evan Barr Douple has been included in Marquis Who's Who. As in all Marquis Who's Who biographical volumes, individuals profiled are selected on the basis of current reference value. Factors such as position, noteworthy accomplishments, visibility, and prominence in a field are all taken into account during the selection process.

With more than 45 years of professional experience to his name, Evan Barr Douple, PhD led an accomplished, multi-faceted career in radiation biophysics, scientific administration, research, and education prior to his official retirement in 2013—although his contributions to his many fields were far from over at that point. Upon reflection of his incredible life and career, the humble Dr. Douple says he has been proud of the "dents and small progress" he made when it came to remarkable strides in medical treatments and the training of generations of science-minded students across several institutes of learning.

Born in Hershey, Pennsylvania, and raised in Western Pennsylvania, Dr. Douple was first drawn to the wonders of science through the launch of Sputnik-1, by the then-Soviet Union in 1957. His father, a fine arts professor, even made a sculpture of him in their backyard garden when the satellite went over the globe. The interest never dwindled and upon graduating with a Bachelor of Science from Millersville State College in 1964, he became qualified to teach chemistry, physics, and biology and quickly landed a job as a science teacher at Lebanon High School, a position he held for three years. During his time there, due to the competitiveness of the Space Race among the United States, the USSR, and China, as well as others, brought on by Sputnik, there was an overwhelming belief that America was falling behind in science education. As a result, he was granted a fellowship program by the school that encouraged teachers to learn more specialized science in order to upgrade their own skillsets and knowledge—and, in turn, boost the education of their students. Through this, he found himself at Kansas University, where he gravitated toward a summer program about radiation biophysics—though he wasn't sure what it entailed, it's the subject that intrigued him the most. He was accepted into the program and wound up excelling in this relatively unknown area of study so much so that he was just one of two among 32 teachers selected for a special fellowship to complete a PhD and six years of study in it.

As Dr. Douple learned in the midst of his courses, radiation biophysics were utilized in the world of medicine through three avenues: those who specialize in the treatment of cancer and uses it to kill cancer cells and shrink tumors, who work as radiation safety officers and implement radiation protection programs within their organizations, and who are in the field of radiation research to try and find the effects of the energy. He himself became extensively involved in researching how radiation is used to treat cancer. After serving as a teaching assistant and lecturer on the subject at Kansas University for five years, he finally obtained a Doctor of Philosophy in radiation biophysics in 1972—and followed up this achievement with a yearlong postdoctoral fellowship at the University of Wisconsin-Madison. He then began what would become an amazing and rewarding career at Dartmouth Medical School; at the time he was hired, the school had just opened the Norris Cotton Cancer Center, which stood as New England's most comprehensive and premier institution for cancer treatment that made it possible for those in New Hampshire, Vermont, Maine, and Rhode Island to receive top-tier help without needing to travel to New York City or Texas.

Between 1973 and 1992, Dr. Douple advanced from an instructor to an associate professor to a full professor. Concurrently, he was active as a staff consultant at Mary Hitchcock Memorial Hospital, and also found success as an adjunct professor of biomedical engineering at Thayer School of Engineering at Dartmouth from 1976 to 1992 and the director of radiobiology research at the Norris Cotton Cancer Center from 1981 to 1992.

He continued making an impact as a staff scientist for the National Academy of Sciences in Washington, DC from 1992 to 1997 and director on the Board on Radiation Effects Research for the organization from 1997 to 2007, before working as the associate chief of research for the Radiation Effects Research Foundation in Hiroshima, Japan from 2008 to 2013. Even outside of his main responsibilities, he was dedicated to his interests, serving as chair and president of the Hanover Conservation Council from 1976 to 1979; president of the Grafton County Chapter of the American Cancer Society from 1979 to 1981; a member of the board of directors for the Pine Park Commission from 1990 to 1992; president of the Solaridge Cluster Association from 2016 to 2019; and a member of the board of directors for the Osher Lifelong Learning Institute at George Mason University from 2017 to 2020. He was even prolific when it came to written works, contributing more than 100 papers to scientific journals and lending his expertise in the field as the editor of "Platinum Coordination Complexes in Cancer Chemotherapy" in 1984, "Thermal Effects on Cells and Tissues" in 1988, "Biology of Thermal Potentiation of Radiotherapy" in 1989, and "Interstitial Hyperthermia" in 1992.

When he looks back at his remarkable career, Dr. Douple considers the highlights of his professional life to be his work in the development of a system for delivering microwave-induced hyperthermia for the treatment of cancer and research in the use of platinum chemotherapy with radiation therapy and delivery of chemotherapy from biodegradable polymers. He noted, "You don't cure cancer…we try to make little steps while training other physicians and scientists to make sure there is a path forward where the work will continue. If you train students, you are making a big impact on moving forward. I always took great pride in that." 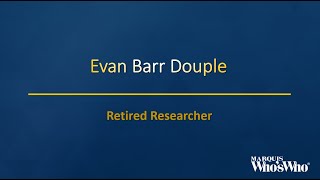