Sandra Holbrook Childs Honored for Her Dedication to Helping Others

TOCCOA, GA, May 16, 2022 /24-7PressRelease/ -- Sandra Holbrook Childs has been included in Marquis Who's Who. As in all Marquis Who's Who biographical volumes, individuals profiled are selected on the basis of current reference value. Factors such as position, noteworthy accomplishments, visibility, and prominence in a field are all taken into account during the selection process.

Through her work with Neighbors4Neighbors Inc. Food Bank, Sandra Childs helps give back to her community in a meaningful way.

A lifelong teacher, Ms. Childs has always had a passion for helping others, though she recalls being unsure as to the specific path her career would take. Her strong interest in home economics, as well as inspiration she received from her grandmother, motivated her to complete a Bachelor of Arts in vocational home economics at Georgia College. She later followed up her BA with two master's degrees; one in home economics, earned through the University of Georgia in 1975, and a second in teaching children with learning disabilities, also earned through the University of Georgia, in 1987. All the while, she held teaching positions at elementary school, middle school and high school.

While she was teaching, Ms. Childs noticed that some of her students were consistently hungry, and less than clean. Taken aback by this, she resolved to help the students in any way she could. She contacted Neighbor4Neighbor Food bank and learned that they did not distribute hygienic supplies, so she approached her church. With the blessing of her minister, she presented a campaign to the congregation to gather toiletry supplies for the needy. Five years later, the program had grown in size and scope, to include not just toiletry, but also diapers and other hygienic supplies. Since donations are collected in pink envelopes during Sunday services, the name pink-envelope Sunday seemed appropriate, and it has stuck ever since. In addition to pink-envelope Sundays, Ms. Childs has been proud to participate in backpack programs every Friday, where children were supplied with backpacks full of food for the weekend.

A strong part of Ms. Childs' motivation in giving back to others is her faith, but she is also no stranger to adversity herself, having gone through several personal losses, including her daughter and brother. Through it all, however, she kept her faith and learned to put one foot in front of the other with a smile on her face. She feels that it is her responsibility as a person to help others in need, regardless of their race, creed or religion.

In addition to her work with Neighbors4Neighbors Inc., Ms. Childs has also served as a member of her local board of education. She feels a great sense of joy in seeing children learn, and that has kept her going through her distinguished career. She encourages the younger generations to help the people who need help, which requires a great love of people. For her part, she hopes to be remembered as someone that others could be comfortable around, and as someone that followed the golden rule.

Ms. Childs has been blessed by a large family, with four children; Lisa, who has sadly passed away, Donna, Andrea and Angela, 10 grandchildren; Chris, Scott, Natalie, Matthew, Brandon, Mallory, Alec, Cooper, Ally and Andi, and seven great-grandchildren; Aiden, Ethan, Bethany, Layla, Noah, Isaac and Olivia. In her spare time, she explores the hobbies that drew her to home economics, including interior design, being a seamstress, and needlework. She is also fond of playing bridge, and she is a great lover of animals. 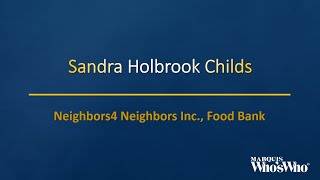