Ms. Mears works with patients who have had severe brain injuries, severe strokes and traumas, as well as COVID-19.

LEHIGHTON, PA, May 16, 2022 /24-7PressRelease/ -- Melanie Mears has been included in Marquis Who's Who. As in all Marquis Who's Who biographical volumes, individuals profiled are selected on the basis of current reference value. Factors such as position, noteworthy accomplishments, visibility, and prominence in a field are all taken into account during the selection process.

As a computer tomography, or CT technologist, with Lehigh Valley Hospital in Pennsylvania, Melanie Mears uses imaging machines and tools to create a map of a patient's internal tissues and organ systems to assess their overall health. Technologists must be able to accurately interpret a physician's scanning instructions, administer contrast materials, prepare and operate the CT scan equipment and position the patient to capture the appropriate images. Ms. Mears works with patients who have had severe brain injuries, severe strokes and traumas, as well as COVID-19.

When she was young, Ms. Mears' grandmother was diagnosed with cancer. Seeing how the medical staff was able to help her, she was inspired to enter medicine herself. Another inspiration of Ms. Mears was her father, who was a firefighter and an EMT. He would often tell Ms. Mears stories about how he would help others in need. When she broke her arm at age 12, the X-ray technologist who helped her left such an impression in her mind that she knew she had found the path she wanted to walk herself someday.

Ms. Mears earned a certification in X-ray medicine in 2000, nuclear medicine in 2001, and finally, her CT scan certification in 2020, which she considers to be the highlight of her career. While she did not have the benefit of formal schooling, she purchased her own study guides, prepared for examinations herself, and made her own way, but this is not to suggest that she was alone. Along the way she was inspired and helped by her mentors, Debbie Miller, Suzanne Brenner and Jean Leinhart. She is also grateful to her X-ray program director, who provided her support and encouragement.

Though life has its ups and its downs, Ms. Mears has dedicated her life and career to helping people through the worst times in their life, and giving them the encouragement they need to get through their hardships. She hopes that she can be remembered as someone who made a difference, however small, and that the experiences she has had with patients, have been positive.

Ms. Mears has been honored with a Marquis Who's Who Humanitarian Award, as an inductee in Who's Who Top Professionals of the Year, and as a featured member in Marquis Millennium Magazine. Her goal in the coming years is to acquire a positron emission tomography, or PET, scan certification. 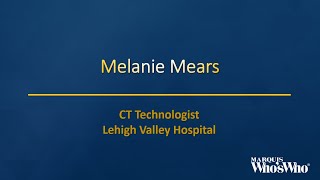