Mr. Pursell was recently voted as the president of the American Association of Automatic Door Manufacturers

CANTON, CT, May 16, 2022 /24-7PressRelease/ -- Leonard M. Pursell Jr. has been included in Marquis Who's Who. As in all Marquis Who's Who biographical volumes, individuals profiled are selected on the basis of current reference value. Factors such as position, noteworthy accomplishments, visibility, and prominence in a field are all taken into account during the selection process.

As a codes and product compliance manager with Stanley Access Technologies, LLC, Leonard Pursell has always been a science-minded and diligent professional, with an eye on precision.

Mr. Pursell first became interested in science growing up because his father worked for Princeton University, focusing on hydrogen fusion. He recalls from watching his father that he seemed to be able to make anything from anything. Mr. Pursell decided that he would follow in his father's footsteps, earning an associate degree in electronics engineering in 1981. After graduating, he found a job with Besam, a Swedish automatic door manufacturing company. In his new position, he tested circuit boards and controllers that would regulate when the doors opened or closed. Eventually, he took over the department and ran it several times. Over time, other opportunities to help the business grow and prosper presented themselves, and he took advantage of them. As a result, the company experienced marked growth during his time there.

In 1988, the chief executive officer of the company honored Mr. Pursell as employee of the year for his work on a new sensor project. For this honor, he received an engraved watch, a cash prize and his name on a plaque. He considers this to be one of his crowning professional achievements.

Throughout his years with Besam, Mr. Pursell became well-versed in codes and compliance, and his experience broadened throughout the company across multiple departments, including government affairs, engineering and troubleshooting. He noted that the industry has four standards through the Builders Hardware Manufacturers Association, and he has chaired every one of them, even to the point of having authored one himself. Mr. Pursell is currently the section chair for power Doors within BHMA.

In 2001, Besam became ASSA ABLOY, and Mr. Pursell remained with the company for another 13 years. By the time he left in 2014, he had spent more than 32 years with the company, and 25 years traveling the country, training, troubleshooting, and supporting the company's distributor network and products in the field, which allowed him to make lifelong friends around the country. Following his departure from ASSA ABLOY, Mr. Pursell joined Stanley Access Technologies, where he remains to this day. Additionally, he was recently voted as the president of the American Association of Automatic Door Manufacturers, having been part of the organization since its inception in 1994. He is grateful for the mentors who inspired him throughout his career, particularly Bruce Campbell, the vice president of technical services. Mr. Pursell recalls that he always gave him great advice and helped him to improve his way of thinking.

Mr. Pursell's advice to the next generation who wants to pursue the same type of field is to know your product, don't get too full of yourself when you achieve success, be humble, treat people nicely along the way, and don't burn your bridges. 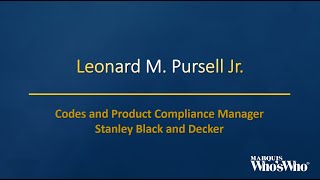