In 1979, Dr. Murren was named Special Education Teacher of the Year for the Susquehanna Chapter of the Council for Exceptional Children

Since her retirement, Dr. Murren has become involved with the Thunderbolt Foundation, the mission of which is to raise money to supplement the work of the Littlestown Area School District.

LITTLESTOWN, PA, May 16, 2022 /24-7PressRelease/ -- Jacqueline Elder Murren, PhD has been included in Marquis Who's Who. As in all Marquis Who's Who biographical volumes, individuals profiled are selected on the basis of current reference value. Factors such as position, noteworthy accomplishments, visibility, and prominence in a field are all taken into account during the selection process.

As an instructional advisor at Lincoln Intermediate Unit 12, Dr. Jacqueline Murren has dedicated her life and career to education.

During that time, her career advanced as well. she was a pre-school teacher for three- to five-year-old children with disabilities, then a junior high school and elementary teacher for learning disabled students. While she was involved with the preschool program, she served children with a variety of intellectual. physical and sensory disabilities and taught a classroom program three days a week, making home visits during the other two days to not only teach the children who were enrolled, but also to work with their families on methods to assist their children at home.

At the junior high and elementary levels, Dr. Murren served children with intellectual and learning disabilities in a resource room setting. She met with the children once or twice a day for instruction, and weekly to confer with their regular education teachers on behavioral and instructional strategies and to address any concerns the teachers may have had. At the same time, she was also a member of the Council for Exceptional Children, Western Maryland College Chapter, serving as President during the 1974-1975 school year. She was also a member of the York County Association for Children with Learning Disabilities. In 1979, she was nominated for and selected as the Special Education Teacher of the Year for the Susquehanna Chapter of the Council for Exceptional Children.

After six years of classroom teaching, Dr. Murren was promoted to the position of instructional advisor. In that role, she visited assigned LIU teachers in various special education programs to advise them on instructional and behavioral techniques for their students. She was also responsible for chairing IEP and other parent conferences and was the team leader conducting student review meetings with the teachers and psychologists on a weekly basis. She was then asked to serve as preschool program supervisor, which entailed supervising the preschool teachers and their classroom assistants. She also supervised the occupational and physical therapists of the IU for six years. During that time, she participated on several PA Department of Education panels at state conferences on preschool programming for disabled children.

Dr. Murren served as the Chair of the Educational Supervisors of OT and PT Committee for Central Pennsylvania Intermediate Units and School Districts from 1982 to 1984. Having been offered the opportunity to teach graduate courses in reading instruction, she requested and was granted permission to return to the position of Instructional Advisor in 1985, which allowed her to not only continue her career with LIU #12, but also expand the breadth of her educational experiences.

In 2003, Dr. Murren wrote and was selected for a PA Department of Education Grant for teaching parents how to assist their children in reading at home. The grant program was carried out in the LIU #12 Therapeutic Emotional Support Class at Rolling Acres Elementary School and consisted of a series of six trainings for the students' parents in the fall of 2004. Part of the grant money provided for babysitting for all of the families' children as well as the evening meal for all attendees to maximize the number of parents participating.

On June 30, 2010, Dr. Murren retired from the Lincoln Intermediate Unit #12. However, over the next three years, she served as Director of Special Education for the Littlestown Area School District on a contractual, consultant basis when the permanent Director was assigned to other duties or had medical leave. While working for LIU #12, she taught master's level classes on Reading in the Content Areas and Differentiation of Instruction in the Regular Education Classroom for Penn State York, Wilson College and Immaculata College.

Since her retirement, Dr. Murren has become involved with the Thunderbolt Foundation, the mission of which is to raise money to supplement the work of the Littlestown Area School District in educating and providing opportunities for the students of our community. She is now serving as vice president of the board. Her involvement with this organization has permitted her to continue contributing to education by planning and participating in fund raisers for the various initiatives the Board members, in consultation with the Superintendent of Schools, have determined.

In addition to her work on the Thunderbolt Foundation, Dr. Murren has established two educational endowments through the Adams County Community Foundation to benefit the students of the Littlestown Area School District. The first, the Ruth W. Elder Memorial Endowment, named for her mother and established in 2014, pays the fees for the various Social Studies Advanced Placement Course Evaluations, so the enrolled students can avoid the costs of these tests and obtain college credit for those courses while still in high school. The second endowment is named for her late husband, Douglas R. Murren and herself, as both of them were and are voracious readers. This endowment, titled the Jacqueline and Douglas R. Elder-Murren Endowment for Literacy, was established in 2020 and will make funds available to the Littlestown Area School District for literacy projects at Alloway Creek Elementary School for which additional monies are needed. She finds these endowments, as well as her work with the Thunderbolt Foundation, very fulfilling in continuing her interest in and service to children. 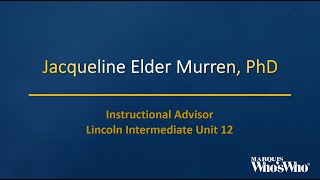