Notably, Mr. Odom has received a Top 40 Under 40 Award from the National Trial Lawyers Association

Looking back over his career, Mr. Odom finds a great deal to be proud of, including some of the settlements he has won for his clients.

BIRMINGHAM, AL, May 18, 2022 /24-7PressRelease/ -- Chris Odom Esq. has been included in Marquis Who's Who. As in all Marquis Who's Who biographical volumes, individuals profiled are selected on the basis of current reference value. Factors such as position, noteworthy accomplishments, visibility, and prominence in a field are all taken into account during the selection process.

As an attorney with Pepper & Odom, Chris Odom attributes his success to an internal motivation and drive to serve his clients, as well as his entrepreneurial spirit that pushed him to co-found his firm.

Growing up, Mr. Odom's family lived in poverty, but he dreamed of a better life. He was watching television with his mother one day and suddenly came upon the goal of becoming an attorney, which would allow him to provide for his family, and help others at the same time. In time, he put his childhood dream to the side in favor of other career goals, such as business school or finance, but he had a conversation with an academic advisor that brought his old ambition to the surface. At the time, Mr. Odom mentioned to the advisor that he wanted to enter the stock market and handle initial public offerings, or IPOs. Upon hearing this, the advisor recommended that he enter law school and move to New York City, which he did. After starting law school, he quickly realized that the law was his true calling, considering his previous interest in finance as a detour from his true goal.

Mr. Odom earned his JD from The University of Alabama School of Law in 2012, and made the decision thereafter to co-found Pepper & Odom with his law partner, Everett Pepper. Mr. Odom never performed well in committees, and prefers to be the captain of his own ship, so entrepreneurship was a natural choice for him. Of course, the great challenge for Odom and Pepper was starting a law firm fresh out of law school. With no financial backing, they self-funded the practice and hit the ground running, serving as lead counsel for jury trial cases. Winning case after case, they quickly made a name for themselves, earning recognitions and awards from organizations and publications.

In his current position, Mr. Odom is able to take the cases he wants to take, and litigate them in the way he thinks is best. He acknowledges that going into business for oneself involves risk, but he feels that it worked out for the best in his case. In one notable case, Mr. Odom was able to acquit a client of a charge that might have led to a 20-year sentence otherwise. Although he regards the outcome of that case as one of the highlights of his career, he avoided criminal law cases thereafter because he found it troubling to take another person's freedom into his hands. Mr. Odom currently practices personal injury trial law, and he finds that to be a much better fit as far as specialties are concerned.

Looking back over his career, Mr. Odom finds a great deal to be proud of, including some of the settlements he has won for his clients. Additionally, he has received prestigious awards, including a Top 40 Under 40 award, from such organizations as the National Trial Lawyers Association. He is a member of such organizations as the University of Alabama Alumni Association, the Farrah Law Alumni Association at UA Law School, Phi Alpha Delta, The Maritime Law Society of the United States, Sigma Alpha Lambda Honor Society and Phi Kappa Phi.

When asked about what advice he might pass down to the next generation, Mr. Odom replied, "Take your time with trying to achieve success. Whatever you think success is, it is going to take time to get there - you don't need to rush it. Just keep your head down and do what you think is right. If you try to rush it, I think you'll burn yourself out and you may become content with what you're doing. I would say take your time and enjoy what you're doing along the way." 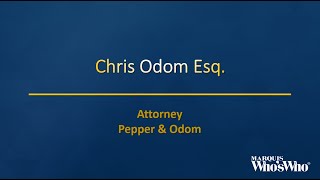