Mr. Hager has helped several companies with their programs in preventing security breaches

ELIZABETH, CO, May 27, 2022 /24-7PressRelease/ -- David "Mike" Hager has been included in Marquis Who's Who. As in all Marquis Who's Who biographical volumes, individuals profiled are selected on the basis of current reference value. Factors such as position, noteworthy accomplishments, visibility, and prominence in a field are all taken into account during the selection process.

As the chief executive officer of the Business Risk Management Group, David M. Hager is well acquainted with a number of fields, including cybersecurity, information technology consulting, as well as backup and recovery systems.

Born in the heart of coal mining country, West Virginia, Mr. Hager grew up watching the miners every day and decided that he wanted something different for himself. As a child, he would tell his classmates that he would become an agent for the FBI. While that did not come to pass, he found that he ended up serving many of the same functions in the career he did attain.

By the time he completed his education, Mr. Hager had already been serving as a criminal investigator and polygraph examiner for the Air Force Office of Special Investigations for several years, beginning in 1973 and ending in 1989. That same year, in 1989, he created an information security program for the government of Israel, entirely from scratch, and received an award for his efforts.

In 1991, Mr. Hager served the Department of Energy's Rocky Flats site as its vice president and general manager of worldwide security until 1996, when he joined the private sector and worked as a recruiter for RSA. The following year, he was the chief information security officer for Coors Brewing Company, holding that role for an additional year. In 1998, Mr. Hager used the experience and industry knowledge he had accumulated to start his own firm, Business Risk Management Group, which he continues to run to this day. He has also held a number of prestigious positions with other technology companies in the years since, including vice president of network security and business continuity with OppenheimerFunds, president of NetRat, enterprise security advisor for Covestic Inc., senior manager and enterprise security architect for Unisys, managing principal enterprise of view solutions for ArcSight, an HP company, enterprise security advisor for mainline Information Systems and security evangelist, senior manager and competency lead for privacy and compliance for Teradata.

When asked about the highlights of his career, Mr. Hager replied that his most notable achievement was helping several companies with their programs and preventing security breaches. Shortly after the 9/11 bombing, he built the same type of plan for response and recovery for Windows Live Organization. He built the Access Control model for the Federal Reserve Board and their 23 banks, along with a full security program as the Virtual CISO for a law firm in Tampa, Fla. that receive ISO 27002 certification. He also built the security standard for California State University after accessing 13 of their universities for security. While working at Rocky Flats DOE facility, he managed all security programs for 11 companies. Previous DOE inspection had listed the security for the sight as Marginal, not the gates guards and guns. A third marginal was considered as UNSAT and the contractors would be in jeopardy. During the change when he took over this role, they were inspected and UNSAT had zero material findings.

Mr. Hager has authored or co-authored a number of articles for industry publications, such as "Agile IT Security – Security for the Sake of the Business," in Mainline Information Systems, "It's All about the Data," in Security Management Magazine; "An Holistic Approach to Managing Business Risks," in Continuity Insights Magazine; "Optimistic Pessimist," in CSO Magazine and "Thwarting Cyber Terrorism," in Network World Magazine. Though he has had an impressive career already, Mr. Hager plans to continue his contributions to cybersecurity for many years to come. 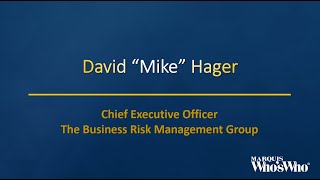